E-levy: GRA issues guidelines for reversal of wrong deductions; gives clarity on charges
Covid-19: It must be a choice, not force — Group to government
Two arrested after Nkoranza youth attack Police station 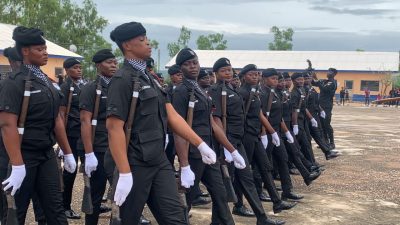 A total of 212 female police recruits passed out at a colourful ceremony held at the Police Public Safety Training School (PPSTS) in Pwalugu in the Upper East Region.

The all-female recruits, who formed the second batch of recruits from the school this year, were admitted to the Ghana Police Service as General Constables.

The passing out parade coincided with the 70th-anniversary celebrations of Women Policing in the Ghana Police Service.

During the six months of training, the recruits acquired skills in driving, riding, swimming, crowd control, incident and disaster.

The rest were crime scene and traffic management, radio communication, intelligence gathering, and community-based patrols, among others.

The recruits carried out drills in women in policing formation as well as adinkra symbols of loyalty and unity.

For her prize, she received a baton of honour, cash worth 1,000 Ghana cedis jointly sponsored by the Ghana Police Service and the State Insurance Company (SIC), Cover and an evidence decree book from the reviewing officer.