Suspension of road tolls was to save lives and properties – Roads Ministry
“No Ghanaian was stabbed to death in South African over Ghana’s penalty controversy” — Ghana’s High Commission in South Africa
Integrate Ghana Post GPS into your activities by May 1- Frema orders all MMDCEs, CEOs 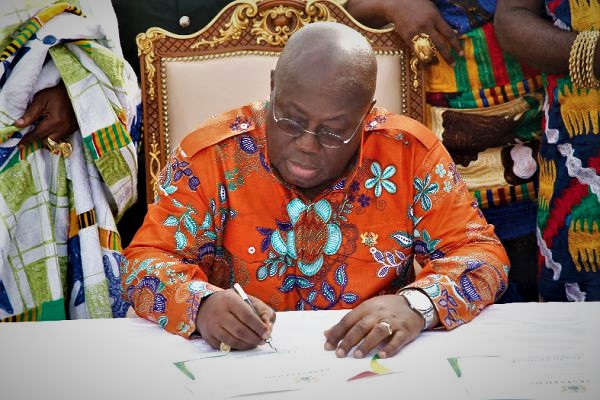 With less than two months to celebrate 60 years of its creation, the Brong Ahafo Region was yesterday split into three with the creation of two new regions, Bono East and Ahafo.

At separate ceremonies at the Jubilee House, President Nana Addo Dankwa Akufo-Addo presented the Constitutional Instrument (CI 113) that created the Bono East Region to the Paramount Chief of the Yeji Traditional Area and President of the Brong Ahafo Regional House of Chiefs, Pimampim Yaw Kagbrese V, while CI 114, which created the Ahafo Region, was presented to the Omanhene of the Yamfo Traditional Area and President of the Council of Ahafo Chiefs, Nana Ansah Adu Baah.

Delegations from the two new regions who were at the Jubilee House jubilated as the President presented the Cls to their leaders at the ceremonies.

At the durbar to mark the inauguration of the Bono East Region, President Akufo-Addo asked the current Brong Ahafo Regional Minister, Mr Evans Opoku Bobie, to take oversight responsibility for the region in the meantime.

The President said a new era of progress and prosperity had dawned for the people of the Bono East Region, an enclave ethnically diverse and representing about two-thirds of the entire landmass of the then Brong Ahafo Region.

After receiving a petition from 14 chiefs from traditional areas within the municipalities and districts of the proposed Bono East Region, President Akufo-Addo said, he referred it to the Council of State, in accordance with the dictates of the Constitution, leading to the establishment of a Commission of Enquiry, which paved the way for public hearings and the receipt of other petitions from all and sundry.

The President said the creation of the six new regions “presents us with the opportunity to serve better the needs of the people from these new regions through the effective and efficient reorganisation and distribution of our public services and infrastructure”.

He said projects and infrastructure of the government would be fairly distributed in the six regions and appealed to the people to support the government to develop the new regions.

To demonstrate the commitment of the government to the development of the six regions, the President said, a GH¢20- million seed money had been allocated to initiate development in each of the regions.

Pimampim Kagbrese, on behalf of the chiefs and the people of the new region, expressed appreciation to President Akufo-Addo for heeding to their request to create the region.

He said the people of Ahafo had petitioned successive governments for close to 40 years, dating back to 1981, but their effort did not yield any result.

He expressed delight at the turnout during the public hearing in the Ahafo area and said about 20,203 people attended the five public hearings organised in the then proposed Ahafo Region.

President Akufo-Addo mentioned some of the resources which could be found in the area as gold, diamond, iron ore and bauxite and said with those resources, the region’s potential for development clearly existed.

That, he said, would also enhance employment and increase the socio-economic development of the area.

The Yamfohene, on behalf of the chiefs and the people of the new region, expressed appreciation to all the stakeholders, including President Akufo-Addo, members of the Commission of Enquiry and the Minister of Regional Reorganisation and Development, Mr Dan Botwe, for their immense support and contribution which ensured that the creation of the Ahafo Region became a reality.

Mr Botwe condemned the acts of lawlessness which greeted the choice of Damongo as the capital of the newly created Savannah Region last Tuesday.

He said about seven people had so far been arrested, while the security agencies continued to hunt for the other perpetrators.
He was hopeful that the law would deal with those people.

Mr Botwe, who took time to explain the circumstances which led to the choice of Damongo as the capital, said on January 12, after the referendum, the Overlord of Gonjaland met all paramount chiefs, opinion leaders and his campaign team and thanked all of them for the campaign which he described as very successful.

He said the Yagbonwura also took the opportunity to ask his people to support Damongo as the regional capital, for which he was presenting a petition to the President.