About 120 roofs of houses have been ripped off, displacing several people at Obogu in the Asante Akyem South District of the Ashanti region follow 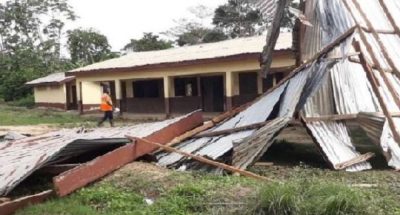 About 120 roofs of houses have been ripped off, displacing several people at Obogu in the Asante Akyem South District of the Ashanti region following a torrential rainfall on Sunday, March 20.

The incident occurred around 5:00 pm during the heavy downpour which was accompanied by strong winds.

The affected buildings include residential, schools among others as a transformer that supplies power to the community was not spared, cutting the community from the national grid.

He said two public schools were affected, including the Faith Experimental Primary School which has affected academic activities.

Mr. Asante said he has reported the incident to the National Disaster Management Organization (NADMO) and the District Chief Executive for the area who had been to the community to assess the situation.

He, therefore, called on the government and philanthropists to come to the aid of the community because it will be difficult to get a place for the affected persons to lay their heads.

For her part, the Headmistress for Obogu Faith Experimental Primary School, Mrs. Gifty Owusu Sarpong called on the government to as a matter of urgency come to the aid of the school and fix the affected classrooms.