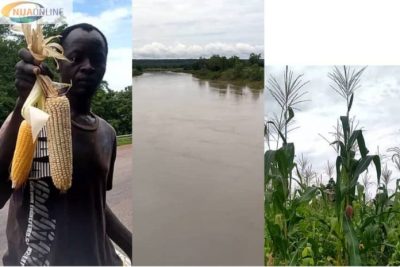 Farmers along the white Volta in the Talensi District of the Upper East Region have begun harvesting their produce to prevent the flood waters from the Bagre Dam from submerging their crops.

Management of the Bagre Dam, SONABEL, in Burkina Faso opened the dam Thursday, September 1, 2022 and is expected to take effect downstream at the various communities along the White and Black Voltas.

As usual, farmers along the White Volta who cultivate maize, groundnut, yellow melon, millet, vegetables and other crops have started evacuating their crops and as well abandoned their farms that are still young to harvest.

Onuaonline observed that, a lot of farmers along the White Volta have abandoned their settlement without cultivating this season due to the annual flood disaster caused by the Bagre Dam spillage. Most farmers in the flood prone areas have for the past years of the spillage, suffered losses including farmlands, animals and other properties.

The Talensi District Director of NADMO, Robert Abeero Alpha who was at the White Volta to take records of the water level and the situation at hand, said, intensive education and monitoring in the prone areas is ongoing with emergency response team on standby. Mr. Abeero has therefore encouraged residents living in the areas to move upstream to prevent any disaster.
Robert Abeero Alpha is Talensi District Director of NADMO

Some affected farmers shared their experiences whenever there is a spillage from the Bagre dam.

Morgan Abaah who has been farming along the White Volta for more than a decade said “as I speak, myself and my workers have started harvesting some of the riped crops to at least salvage majority of the crops before the spillage takes effect downstream. This is where we have been farming all all our lives and we do not have any place to relocate and farm”.

Another farmer, Francis Ayine shared his experiences farming along the White Volta.

“For now we do not have any option than to harvest the ones that are ready. But as for the young crops, the water will submerge them depending on the volume of the water that is being spilled. Our hope and prayer is that, the Pwalugu Multi Purpose Dam project be completed soon in order to avert these disasters”.

NADMO has intensified education and monitoring in flood disaster prone communities that are mostly affected by the spillage.