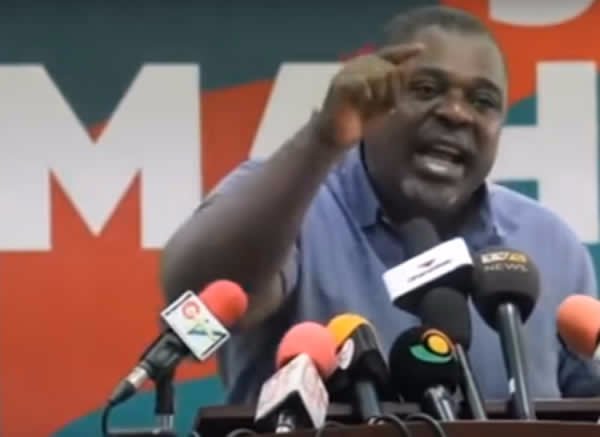 A Deputy National Democratic Congress General Secretary Koku Anyidoho has been arrested by the police after predicting the President, Nana Addo Dankwa

A Deputy National Democratic Congress General Secretary Koku Anyidoho has been arrested by the police after predicting the President, Nana Addo Dankwa Akufo-Addo will be overthrown.

The tough-talking NDC politician was picked up at the Accra International Press Center by plain-clothed officers. The NDC was having a press conference to react to the controversial Ghana-US Military Cooperation agreement when the arrest was done.

About 16 officers besieged the press center to effect the arrest.

Anyidoho was seen seated at the back of a vehicle flanked by the NDC National Chairman Kofi Portuphy and the General Secretary Johnson Asiedu Nketia but the three would rather walk to the police headquarters which is meters away from the Press centre.

As the throng got closer to the police headquarters, the NDC Deputy General Secretary was whisked away from the protection of the crowd.

“We will not allow a 77-year old man to destroy the nation” Deputy NDC Communications Director Kwaku Boahen told Joy News after the arrest.

‘That is sacrilege’ PNC Chairman Bernard Mornah said condemning the disruption of their press conference on the controversial US-Ghana military deal.

A coalition of political groups, Ghana First, had organised the press conference to drum public support for a protest march slated for Wednesday.

He described the arrest of Koku Anyhidoho as an attack on free expression.

His exact comments on an Accra-based radio station are reproduced:

“On the January 13, 1972 a certain Col. Ignatius Kutu Acheampong led a movement that removed the Progress Party from power. Busia was the Prime Minister and Akufo-Addo’s father was a ceremonial president. Somebody should tell Nana Akufo-Addo that history has a very interesting way of repeating itself.”

“There’ll be a civil revolt. There’ll be a people’s movement. During President John Mahama’s tenure didn’t we receive similar threats from the likes of Let My Vote Count and OccupyGhana. There’ll be a civilian coup d’etat; there’ll be a social revolution and the movement is starting on Wednesday. He [Akufo-Addo] will be fed up at the Presidency.”

Hours after his comments went viral, the NDC General Secretary Asiedu Nketia, who accompanied Koku Anyhidoho to the police headquarters, announced the NDC dissociates itself from Koku Anyhidoho’s comments.

He said the views expressed were the politician’s individual position and does not reflect the position of the party.