This part of the recommendation by the inter-ministerial committee set up by President Akufo-Addo last year to look into the increasing cases of carnages on the country’s roads.

The committee also recommended that ¢6.5 million be allocated to the National Road Safety Commission for public education and training.

Executive Director of the Commission May Obiri-Yeboah told journalists Sunday that her outfit has started implementing the recommendations.

“The Report recommended the following:

1) Transformation of the National Road Safety Commission (NSRC) to an Authority and budgetary support of ¢6.50 Million for the Commission to scale up public education/sensitization and training,

2) Request for approval of a proposal by the Ghana Police Service to enable the MTTD to:

a) Deploy Traffic Cameras Systems to detect and apprehend speed, red-light and related traffic offences, and

b) Remove disabled vehicles from the road,

3) Request for an amount of ¢1,05 billion for the road agencies, Ghana Highway Authority, Department of Urban Roads and Department of Feeder Roads to clear the backlog of road signs, road-line markings, traffic signal lights and crash barriers on the national road network,” she said.

By a letter dated April 16, 2018, the President granted Executive Approval for the proposed working solutions.

The NRSC has been called to action after about 90 people were confirmed dead in two separate road crashes in the Bono East and Central Regions on Friday.

Police have confirmed 55 died in the gory head-on collision between two passenger buses on the Kintampo-Techiman road. Fifty-three others are seriously injured.

Hours after the first accident, 30 people also died in another fatal accident which occurred at Ekumfi Abor on the Winneba-Cape Coast Highway in the Ekumfi District of the Central Region. 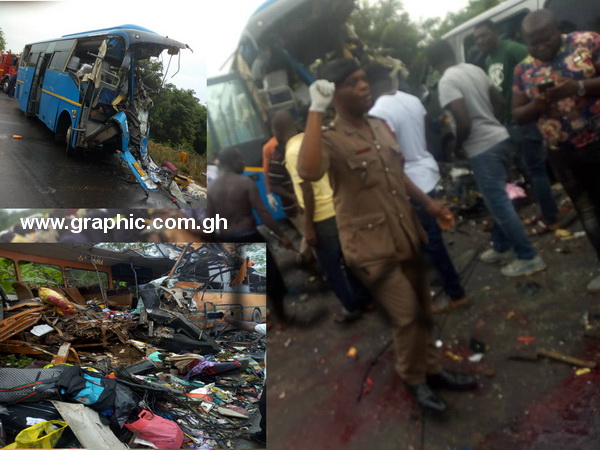 The accident involved a Yutong bus which was travelling from Takoradi to Accra and a Metro Mass Transit bus heading towards Cape Coast.

According to an eyewitness, the Yutong bus was trying to overtake another vehicle in the wet morning when the accident occurred.

This shocked the country and got many talking with social media going crazy with users calling on government to make the numerous road laws work.

On Joy FM/MultiTV’s news analysis show on Saturday, Randy Abbey, host of Good Morning Ghana on Metro TV, described the country as “…a nation of talkative.”

He described state authorities’ reaction to recurrent national issues, one of them the increasing spate of road accidents as only paying lip service to the issues.

“I remember we’ve had to deal with this issue on this programme one of the few times that I have been here and it is just to tell you how we are a nation of talkatives,” he said.

He said in reading around some of these issues for Newsfile, he found that “just last year, there were three separate accidents in the Northern region on a Saturday and a Sunday which led to the loss of 29 lives.

“After receiving and reviewing the committee report he has granted executive approval for its immediate implementation,” he read out from a news report from last year.

Well, the NRSC Director said there is an action plan in place.

Meanwhile, government reiterates commiserations to victims and families affected by the recent incidents of road carnage that have claimed close to 90 lives since on Friday.

President Nana Akufo-Addo speaking within hours of the incident on Friday morning, sympathised with the families and challenged the Police Council to regulate road traffic.

He also called for the speedy implementation of the recommendations of the inter-ministerial committee set up last year to propose ways to deal with carnage on our roads.

The Information minister confirmed that government has also undertaken to underwrite the treatment costs of the injured.