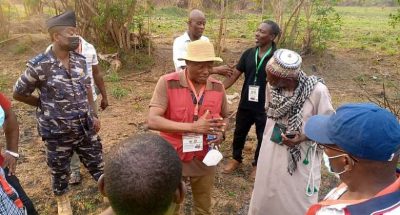 After a peaceful deliberations with the herdsmen by the Municipal Chief Executive led MUSEC, comprising The Ghana Police Service, the National Intelligence Bureau, the National Disaster Management Organization and Sub Committee Chairman on Security and Justice, it was mutually agreed that, they (herdsmen) will vacate the Municipality by close of Sunday 20th February, 2022 and are also liable for any damages done to any farm produce whenever assessment reports are made available to them.

The nomadic herdsmen being led by Chief Issaka Hamid, thanked the MUSEC for the peaceful manner of handling the situation and debunked any false claims made on other media outlets that suggested that they (herdsmen) were brutally treated by the MUSEC during their earlier operations.

Hon. Alhaji Umar Babs Bodinga in an interview with Nana Kwasi Asare assured the Municipality, especially the farmers that, the Municipal Security Council is in charge and will continue to protect and defend the peaceful atmosphere of the Municipality.

He further sent a strong word of caution to other nomadic herdsmen who may have intended to invade the Municipality to rescind their decision as MUSEC will not allow that to happen and admonished all herdsmen to confine their cattle.

The MCE called on all to be vigilant and report any such situations to the assembly for prompt action.

It could be recalled that, about 500 farmers in the Abuakwa North Municipality protested against invasion of nomadic herdsmen and their over 50,000 cattle on their land, destroying their farms.

The Municipal Security Council of Abuakwa North acted promptly and drove away the herdsmen but later realised that they have returned.

Upon further checks, the herdsmen pleaded with the Municipal Security Council to grant them two(2) days to prepare and vacate the Municipality of which expired hence the current operations to flush them out according to Hon Alhaji Umar Babs Bodinga.