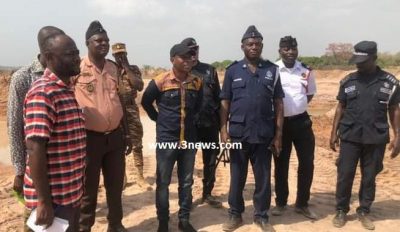 The East Gonja Municipal Security Council (MUSEC) has described as unfortunate the leakages that have characterized revenue mobilization of the assembly.

Metropolitan, Municipal and District Assemblies (MMDAs) are empowered under the Local Government Act 462, 1993 and the 1992 Constitution of Ghana to mobilize revenue within their jurisdictions.

The revenues mobilized enable the assemblies compel development in an accelerated fashion.

However, one bigger challenge over the years has been the leakages characterized by the the collection of the revenue.

This phenomenon has made it difficult for most assemblies to meet their revenue mobilization targets over the years.

But the East Gonja MUSEC has taken some steps to address this challenge.

On a field day at the Makango sand winning point and the market, Chairman of MUSEC Richard Broni outlined some strategies to deal with the leakages.

“We need to strengthen our monitoring strategy to ensure the leakages are dealt with so as to relatively enhance the collection so that proceeds will no longer go into some pockets.”

He assured the Assembly will take immediate action to address the leakages.

The MCE expressed concern over the degradation of the environment at the Makango sand winning point.

“I am saddened by the way and manner sand winning is done here. The revenue that comes to the assembly from this place is not so impressive yet the land is being destroyed and this we will not allow,” he stressed.

The Salaga Divisional Police Commander, Chief Superintendent Amos Yelusong, who spoke on behalf of all security services on the Council, warned the law will deal with persons who will be found culpable of the leakages.

“We are ready to support the assembly raise more revenue for development and we will deal with persons who want to cheat the system.”