Finance Minister, Ken Ofori-Atta has said that the traditional Cocoa Syndication Loan which is expected in the last quarter of 2022 will promote t 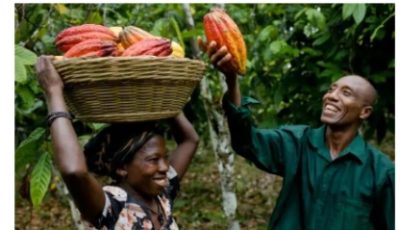 Finance Minister, Ken Ofori-Atta has said that the traditional Cocoa Syndication Loan which is expected in the last quarter of 2022 will promote the cocoa sector.

He also said it will further help us build our FX reserves and provide a strong buffer for the cedi in the last quarter of the year.

Mr Ofori-Atta said these at a press conference in Accra on Wednesday September 28.

His comments come at a time the Coalition for Cocoa Sector Reforms has told the Ghana Cocoa Board (COCOBOD) to work to ameliorate the economic conditions of cocoa farmers.

According to the group, cocoa farmers are growing poorer and are now more vulnerable than ever before.

In a press statement, the Coalition said the farmers deserve not less than 100% increase in farm gate price beginning the 2022/23 season.

“We wish to emphasize for the attention of COCOBOD and for that matter government that, cocoa farmers are growing poorer and poorer and are now more vulnerable than ever before.

“They deserve no less than 100% increase in farm gate price beginning the 2022/23 season. This implies no less an amount than GIV 21,120.00 per tonne or 1,320.00 per bag from the GII< 10,560 per tonne and GII< 660 per bag respectively offered in the 2020/21 seseason and from cocoa exports. “The Coalition of Cocoa Sector Reforms (CCRS) an advocate group for Ghana cocoa industry players, makes this proposal for the consideration and implementation by COCOBOD,” their press statement said. It added “Regulatory mismanagement and corruption continues unabated putting licensed buying companies into debt, depreciation of the cedi, increasing inflation, activities of galamsey destroying water bodies, the degrading forest and arable lands among all the factors earlier enumerated worsens the economic and social well-being of farmers and put the industry under serious threat . “The industry is actually sinking at a faster speed. The cocoa farmer is hungry and we call on government to address these concerns. “We call on civil society to come together to advocate for sustainable cocoa since the industry is under a more serious threat. Production volumes is on a sharp decline because there’s no incentive for the youth to go into cocoa farming and our forest continues to see serious degradation by galamsey activities. The industry we predict might not survive the next decade if swift interventions are not taken.