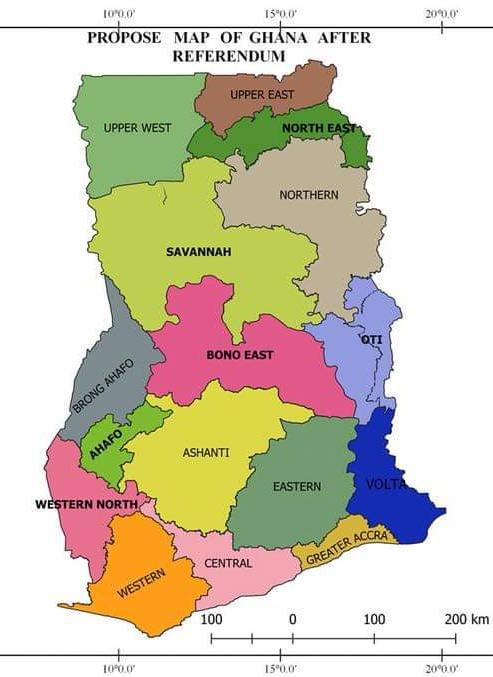 GOASO-MIM TO BE ANNOUNCED AS AHAFO REGIONAL CO-CAPITAL ON WEDNESDAY 13TH FEBRUARY 2019?

Feb. 8, 2019. Government will outdoor the six newly created regions at the Jubilee House next week, according to deputy Regional reorganization Min

Government will outdoor the six newly created regions at the Jubilee House next week, according to deputy Regional reorganization Minister Martin Adjei Mensah-Korsah.

According to the deputy Minister, a series of activities have been lined up to ensure that the outdooring of the new regions and their regional capitals is done devoid of any shortcomings.

Mr. Mensah-Korsah, outlining the itinerary for the outdooring the new regions explained that government has set aside 3 days to outdoor the six regions and will do two regions every day.

The first two regions he opined will be the Savanna and North East regions which will be outdoored on Tuesday February 12, 2019 at the Jubilee House and to be followed by the Bono East and Ahafo, Regions on Wednesday February 13, 2019 and then the Oti and Western North regions on Friday, February 15, 2019.

Goaso, which is the capital of the Asunafo North municipality, is seen as the frontrunner, especially as it has the facilities to host the regional capital But Mim, formerly known for its timber business, is the dark horse in the race and sources close to Ahafonews.com reveals that the petitioners of Mim has been able to make a case in terms of Goaso lacking stool lands and won’t allow Goaso to build on their land if they are not co-capitals.

Some of the notable towns that came up as strong contenders for the capital of the Ahafo Region were Goaso, Mim, Duayaw Nkwanta, Bechem, Hwidiem and Kenyasi.

Interestingly, Hwidiem and Kenyasi presented a joint petition to the President to make the two towns the co-capitals. However, according to sources their argument was based on centrality and since none of the distances between the various District capitals in the Ahafo region is not more than 100km, it was not able to win them the race.

But without a shred of doubt, the contest for the capital was between Goaso and Bechem. Both have a long administrative history with the British colonial government posting its representatives – District Commissioners – to the two towns in 1901.

Goaso and Bechem have a history of “rivalry ” for supremacy but bearing last minute changes, will Goaso-Mim be the Ahafo Regional Capital coming Wednesday?