Assin Central Member of Parliament, Kennedy Ohene Agyapong, has said neither the longevity of Alan Kyerematen in the race nor Dr. Bawumia’s positi 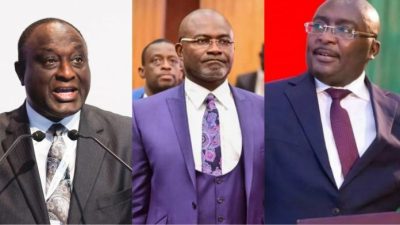 Assin Central Member of Parliament, Kennedy Ohene Agyapong, has said neither the longevity of Alan Kyerematen in the race nor Dr. Bawumia’s position as Veep would stop him from leading the NPP in 2024.

The lawmaker says he is unfazed about the two who have been tipped by political analysts as favourites for the New Patriotic Party’s flagbearership.

The MP who asserts 88 per cent of Ghanaian youth support his candidature in the 2024 elections says his faith is in the grassroots who have expressed a lot of confidence in him.

The possibility of breaking the 8, he noted is the NPP presenting him as the flagbearer of the party in 2024.

Serving his last term in office, President Addo Dankwa Akufo-Addo will not be eligible to contest for the next election, the reason the NPP must get a new person.

Even though interest for the portfolio has stemmed from many quarters, political connoisseurs see Vice President Mahamudu Bawumia and Trade and Industry Minister, John Alan Kwadwo Kyerematen as favourites.

Meanwhile, Kennedy Agyapong, who announced his interest few months ago seem to be gathering momentum as the grassroots appear to be in his favour.

According to a research conducted by the University of Ghana Political Science Department in 2020, Ken Agyapong emerged the most popular entity in the NPP aside from President Akufo-Addo.

However, many of the respondents placed him third when it came to choosing a leader after Akufo-Addo.

The major reason most of the respondents stated was that, the legislator is loudmouthed and his utterances will not appeal to floating voters.

In a recent pronouncement made by the MP, he maintained he will not change his personality because he is seeking to be a flagbearer for the ruling party.

He, however, believes he stands tall amongst the three based on what everyone has done for the party which would be considered to elect a frontrunner for the elephant fraternity come 2024.

“I’m not afraid of Alan and Bawumia. Because at the end of the day we are all going to campaign on whatever each of us has done for the party. I know I’ve done a lot of things for NPP and I believe the grassroots will consider that and vote for me,” he said on YouTube-based channel, Mak TV.