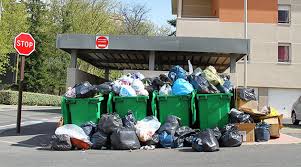 Source: Luvfm The Kumasi Metropolitan Assembly (KMA) owes waste management contractors to the tune of GHS 63, 800,000. The assembly is require

The Finance Ministry, therefore, asked the KMA to make provisions and necessary arrangements to pay the debt.

Mayor of Kumasi, Osei Assibey Antwi, revealed: “This is a debt that I came to meet. It was the central government that was paying until the election time that the Ministry of Finance at that time wrote to KMA that they were challenged with their budget and that it could no longer pay the debt.”

The Mayor describes the debt as the biggest challenge facing the KMA.

The Metropolitan Chief Executive says the assembly is in no position to pay the debt unless central government intervenes.

He was addressing members of the Assembly in Kumasi on Tuesday.

The debt owed waste management service providers, especially J. Stanley Owusu, who manages the Assembly’s landfill site, has been the cause of agitations among workers.

For years, workers of the Oti Landfill Site, for instance, have locked up the facility in protest over unpaid salaries that span seven months.

Officials of these companies have often explained to their workers that monies locked up at KMA has been the reason for their inability to meet obligations, however, workers remain adamant.