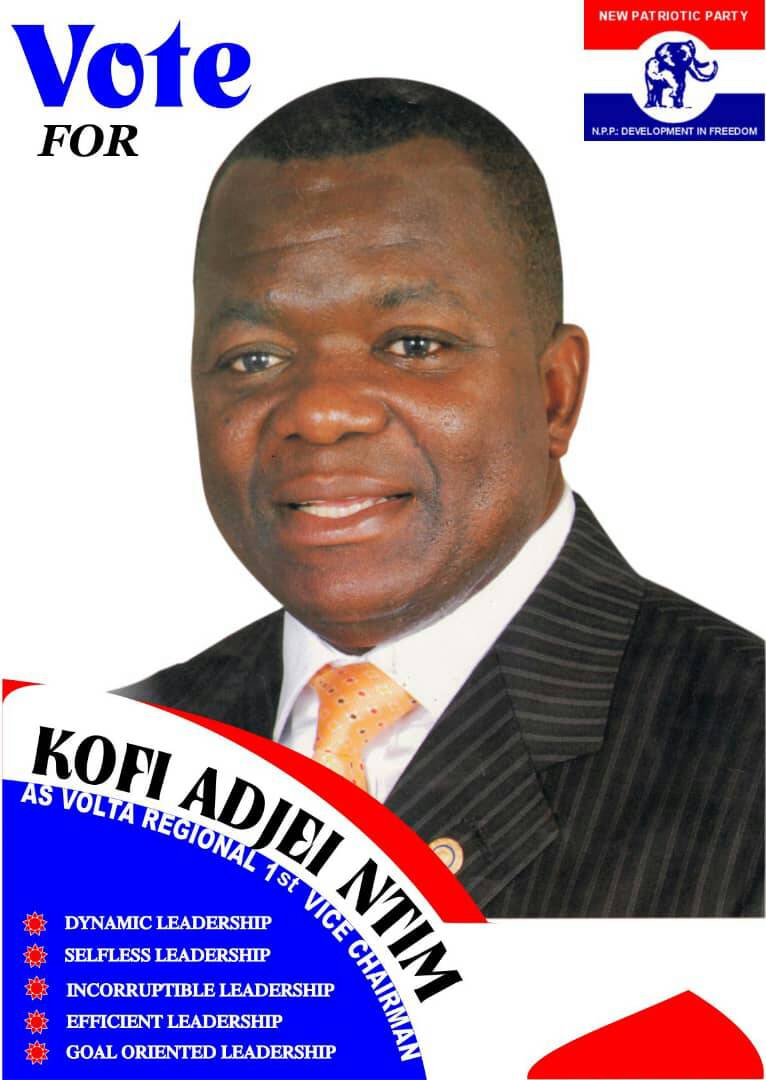 The New Patriotic Party is yet again, about to witness another democratic electoral exercise to chose the regional team towards election 2020. I

The New Patriotic Party is yet again, about to witness another democratic electoral exercise to chose the regional team towards election 2020.
It will be very difficult to pull strings in defense of the fact that the New Patriotic Party has been performing abysmally in the Volta region during general elections, since the inception of the Party in 1992.
In the 2012 Presidential and Parliamentary elections, the NPP secured a zero seat in the Volta region and just a seat in the 2016 elections through a fierce Parliamentary seat battle in the Krachi East constituency, precisely Dambai.

The New Patriotic party is gradually gaining popularity and firming its roots in the Volta region, as the colorful government policies of the Nana Addo led government continues to be rolled out.

Going forward, the efforts of the party in the Volta region must be consolidated and re-energized to boost the electoral fortunes of the New Patriotic Party.

Come what may, elections will be conducted and leaders chosen but the Volta region may spell its doom if some people are not given the opportunity to lead the party into the 2020 general elections because, they hold the magic wand to troll opportunities for the youth and women especially, as well as turn around the electoral disaster of the NPP in the Volta region.

The party must be made to look attractive to floating voters and non – sympathisers of our great elephant family by bringing on board; hardworking, efficient and innovative team whose name and appearance alone in the Regional Executive Committee restore hope and confidence to the unemployed youth of the NPP and ailing party institutions such as the Tescon.

Let no party faithful play any uninformed tactics as if they do not know whom Kofi Adjei Ntim is, what he has done, what he keeps doing and what he is capable of doing because when the Volta region overlooks a man of the caliber of Kofi Adjei Ntim and chooses any other alternative, we may wish to rewind the world to rectify our escapable mistakes.

In the heat of the recent machination of propaganda by the Opposition National Democratic Congress to make the Nana Addo led NPP government unpopular in the face of the voters the ascendancy of unemployment especially among the youth of the New Patriotic Party demands that, a foresighted, workaholic, job creator, intelligent, smart and successful business guru with foreign links like KOFI ADJEI NTIM is the prerequisite.

Even before his intention to contest the Volta regional 1st Vice Chairman of the New Patriotic Party, Kofi Adjei Ntim has been very much concerned about how to bring his usual investors to support government in the construction of the eastern corridor roads and many other infrastructural needs of the Volta region.

Yes! this is the man for the Volta region. Kofi Adjei Ntim as a Volta Regional 1st Vice Chairman means victory for the NPP, dynamic leadership and jobs for the youth and links for the New Patriotic Party at large.

Notwithstanding the success and experience of Kofi Adjei Ntim, he has I the following career Profile:

?Ex Vice President of the National Association of Local Authorities of Ghana (NALAG)

Here comes the son of the great elephant…… A man whose name the NDC communicators hate to hear, knowing his background and track records…….

The Volta region wouldn’t make a better choice than Kofi Adjei Ntim; the man of the grassroot and the youth.