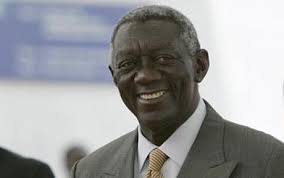 “This Is Beyond A Joke; Its Complete Madness”…As Minority Heads To Supreme Court
You Can’t Satisfy Everybody On New Regional Capitals – Oppong Nkrumah
Allegations of illegal mining in Offin river is being investigated – Minerals Commission

Former President John Kufuor has attributed Ghana’s slow pace of development to failed leadership. Mr. Kufuor believes a mineral-rich country like Ghana should have been better developed than currently is the case. The former president said most of the country’s leaders across sectors are performing poorly because they were forced into those positions.

He was speaking at the launch of an endowment fund for the John Agyekum Kufuor Foundation in Accra. The problem of unprepared leaders is not limited to Ghana, it pervasive in much of Africa, he said. But “I don’t blame the leaders because many of them were forced into leadership positions; they were not prepared;…you cannot give leadership in any sector [to anybody] without they being prepared in terms of knowledge and experience and exposure,” he stressed.

Mr. Kufour wants the process of preparing the country’s leaders to be focused on the youth, who form the foundation for Ghana’s leap to prosperity. He said businesses in a developing country like Ghana cannot reasonably hope to compete favourably with those from the developed world where science and technology has improved efficiency in unimaginable ways.