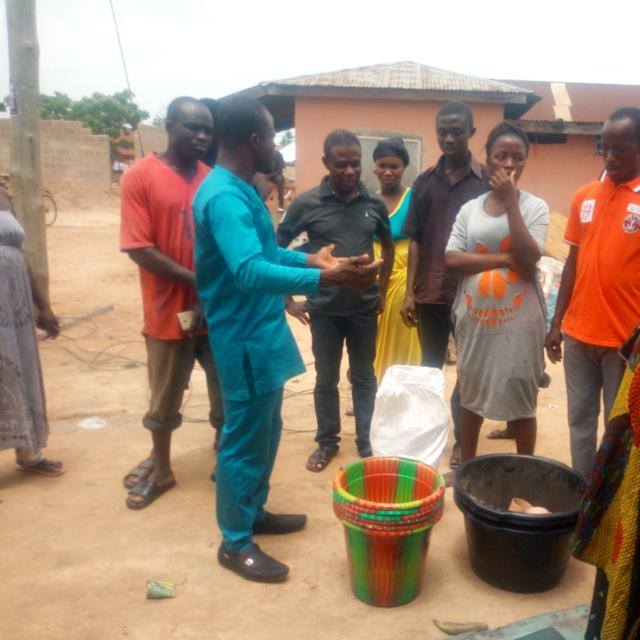 Reports reaching Ahafonews.com from some sources in Kukuom indicate that the newly appointed NADMO Director of Asunafo South and the Organiser of the

Reports reaching Ahafonews.com from some sources in Kukuom indicate that the newly appointed NADMO Director of Asunafo South and the Organiser of the New Patriotic Party in Asunafo South NPP, Mr Donkor Azumbe has distributed NADMO goods to unaffected victims last week Thursday at Kukuom. This they claim is diversion of relief items. The items they highlighted include bags of rice, cups, buckets, etc.

Residents of Kukuom claim that the relief items have been shared by the Director only to his favourite friends who were not affected by the heavy rainfall last month which destroyed many properties including a public Toilet located in Kukuom Bep)so.

When Mr Donkor was confronted by some residents he confirmed sharing the items and that nobody can question him and he had every right to do that.

The real victims of the rainfall in Kukuom are calling on the DCE Hon Osei Bonsu Snr to come to their aid to help them.

The Assembly Member of Kukuom Achiase Hon. Yinka and Hon. Ing. Kobby Amoa-Mensah when contacted by Ahafonews.Com indicated that they had not been contacted on the availability of any relief items for their respective electoral areas. The two Assembly members indicated that they were aware that some items were being distributed in their electoral areas but they’re not privy to the modalities for distribution.

The abject neglect of elected representatives in the distribution of relief items is a bad practice that should not be encouraged. It breeds corruption and creates divide in our town, Kukuom.

The people of Kukuom are demanding from their Assembly members why the real victims of the rainstorm have been neglected by the Nadmo Director. The Assembly members have told their electorate to remain calm as they try to find out the real details of the situation.

Ahafonews has made all effort to contact Mr. Donkor (The NADMO Director) to listen to his side of the story but he has fail to respond our calls.

Ahafonews will follow up on this and bring you the latest developments.