More than eight months after narrowly escaping death while working at Newmont’s Ahafo mine at Kenyase in the Brong Ahafo region, no compensation h

‘Pray for us, the system has made us so’ – Armed robbers tell Kumasi-bound passengers
Aboboyaa collides with trailer; two feared dead
Drivers left stranded due to Accident on the Kumasi – Accra high way 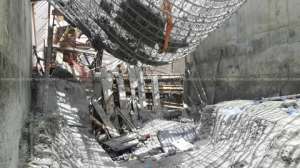 More than eight months after narrowly escaping death while working at Newmont’s Ahafo mine at Kenyase in the Brong Ahafo region, no compensation has been paid to any of the four survivors in spite of the psychological trauma and the mental torture they have been through over the period.

The survivors of the April 7 accident that claimed six lives at Newmont Ghana’s Ahafo mine site are extremely worried about the blatant neglect by Newmont Ghana Gold Limited, Consar Construction Limited and DRA Ghana Limited, under whose watch they nearly died.

They have, for the past weeks been petitioning some opinion leaders at Kenyase to impress it on Newmont Ghana Gold Limited to comply with the recommendations contained in the government’s white paper issued after investigations had been concluded on the accident; and pay them adequate compensations as expected.

Background
It would be recalled that on Saturday April 7, 2018, six workers of Consar Construction Limited, working on a project at Newmont Ahafo mine site at Kenyase in the Asutifi North District of Brong Ahafo died instantly when they were trapped in a mortar meant a construction activity.

Background
It would be recalled that on Saturday April 7, 2018, six workers of Consar Construction Limited, working on a project at Newmont Ahafo mine site at Kenyase in the Asutifi North District of Brong Ahafo died instantly when they were trapped in a mortar meant a construction activity.

The deceased were identified as Kwadwo Asare, Gideon Amankwah, Kojo Bismarck, Ben Brako, Agyei Wale and Ebenezer Sarfo. Four others who survived amidst various degrees of injury, which have rendered some of them seriously incapacitated, are Musa Sulemana, Seth Kwame, Daniel Dzitor and one other person.

They were workers of Consar Company Limited, a sub-contracting firm which had been contracted to construct a reclaim tunnel roof at the Ahafo Mill Expansion Project.

On the Sunday 8th April, 2018 the then Minister of Lands and Natural Resources, John Peter Amewu, led a team of officials from his Ministry and Mineral Commission to visit the accident site at the Ahafo mine in order to ascertain on firsthand the cause and the circumstances leading to the accident.

A Committee set up to investigate the circumstances leading to the disaster found Newmont, Consar and DRA Ghana Limited culpable and hence imposed various fines on them and also instructed Newmont to compensate the survivors of the accident.

“Newmont Ghana Gold Limited for failure to ensure the safety of contractor employees working at the Ahafo Mine Site shall pay the fatally wounded and the injured employees the appropriate workmen compensation”, the Committees’ report recommended.

“In addition, the fatally wounded employees should be compensated for their traumatic death, loss of their life and jettisoning of their livelihood.”

Newmont’s loud silence
Even though modernghgana.com contacted the Public Relations outfit of Newmont on Saturday December 1, 2018 through an e-mail; asking for the company’s side of the story, no response had been given at the time of filing this report on Monday December 10, 2018. They only acknowledged receipt but never responded to the queries.

Investigations reveal that Newmont is yet to comply with the instructions conveyed to them by the Ministry of Lands and Natural Resources in the first week of June 2018, leaving the survivors and their dependents to their fate.

One of the victims of the accident, for instance, was seriously injured in the eye and as such, finds it difficult to see.

“I’ve become partially blind as a result of the accident and life is becoming unbearable as the days pass-by; and I’ve been in the house since. They’ve only been paying my monthly salary but have refused to pay any compensation to me or any of my colleagues who also survived”, he said.

An Opinion Leader at Kenyase, who also spoke to our correspondent, said Newmont virtually paid for all the funeral expenses of those who perished and also compensated their families but has surprisingly chosen to totally neglect those who survived the tragedy.