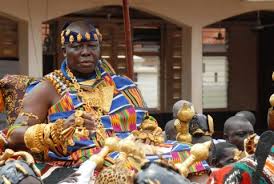 NPP bigwigs go on their knees to beg ‘furious’ Asantehene

NPP executives on their knees at the Manhyia Palace

It was a tense moment at Manhyia Palace on Wednesday as NPP executives went on their knees to apologise to the Asantehene, Otumfuo Osei Tutu II.

The plea for forgiveness follows an outburst by the Asantehene that there are active attempts by some people close to government to pitch him against the Akyems.

Mr Boadu was also at the Palace to secure Otumfuo’s blessing in his bid to secure confirmation as General-Secretary of NPP ahead of the party’s national executive elections.

The entourage fell on their knees to assuage the King’s anger, praying for clemency at the open court of the Manhyia Palace.

Otumfuo’s linguist, Baffour Kantankrakyi at this point stepped in to intercede on behalf of the New Patriotic Party bigwigs who were still on their knees before the King.

‘’Your own grandchildren. Regional Minister, the Mayor and John Boadu. They say this is a surprise to them.

“As a caring parent, you don’t harbour ill-feeling. They are pleading for pardon. Please, forgive them,’’ Otumfuo’s linguist pleaded on their behalf.