Our members are dying; some have suffered stroke – NPP group cry over neglect 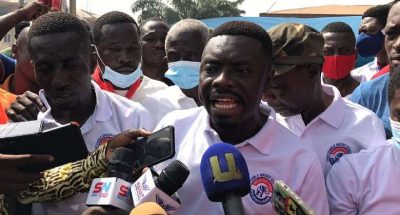 A group calling itself the New Patriotic Party (NPP) Identifiable Groups are wailing ahead of the party’s Annual Delegates Conference this weekend over what they say is total neglect from the ruling government.

Early this week, the leadership of the groups threatened to lead members to demonstrate at the Conference grounds to express their disappointment at government for not fulfilling its promise to members after toiling to help the NPP win the 2020 general elections.

Speaking to Citi News on Friday evening, Convener for the NPP Identifiable Groups, Emmanuel Ampiah Mensah lamented the poor treatment from the government.

He said due to the hardship members are going through, some have died with others suffering from various illnesses.

“Some of them were divorced because instead of them to go and cook for their husband they went away to do this campaign here and there. In fact, what I’m seeing is very dangerous. Now our members are dying. Some have gotten strokes and many are also battling so many sicknesses.

“Up to now, nothing has been done to help us. We are disappointed,” the convener of the NPP Identifiable Groups stressed.

Speaking on the same platform after that interview, National Youth Organiser of the NPP, Henry Nana Boakye, popularly known as Nana B disclosed that the party has started engaging the aggrieved party followers to find the way forward.

He said through his intervention, the NPP identifiable Groups have decided not to go ahead with the planned demonstration at the annual congress grounds this weekend.

“We cannot all of sudden solve all their problems. Me as a national youth leader I have engaged them and that is the more reason why they have dropped all of these [threats to demonstrate] things. I think they are okay for now,” Nana B stated.