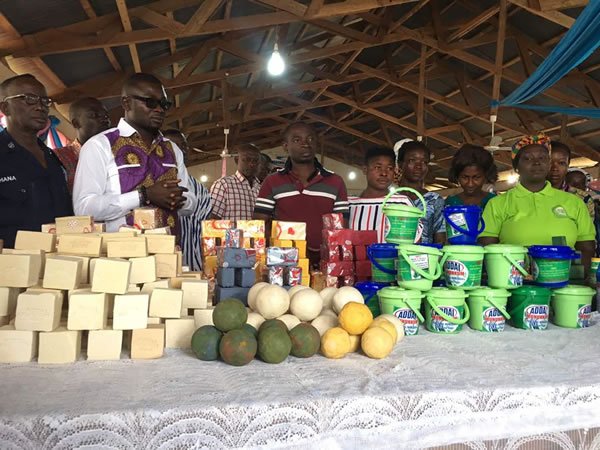 The Techiman North District Assembly has in collaboration with the Business Advisory Centre (BAC) organized a 5-day training workshop in soap making for 54 women within the District.

Participants were trained not only in soap making but also proper packaging methods to ensure their products compete favourably with established brands on the market.

Mr Abraham Kabota who is head of the Business Advisory Centre (BAC) for Techiman Municipality said the objective was to alleviate poverty at the grassroots especially among women.

He said equipping women with vocational skills could revive economic activities in the district since they formed the core of small-scale businesses.

Mr. Kabota called on the trainees to grab this opportunity to set up their own businesses as it is a means of enhancing their livelihoods as well as create jobs for others.

He said the BAC office is always open and ready to assist and provide support to trainees on how to write small business plans that will help them secure financial assistance from financial institutions to aid their soap making businesses.

In an interview with Joy News Anass Sabit, the District Chief Executive for the area, Mr. Peter Mensah said he was “overwhelmed” at what he saw during and after the training adding that the workshop was instituted to empower participants to be self-reliant and urged them to ensure prudent management of their finances as they began their own business.

He said empowering women to be economically independent was his priority and urged women in the district to take advantage of such opportunities to improve their lot.

Mr. Peter Mensah said the Assembly is soliciting for a credit facility that would grant flexible loans to the trained women to be able start their own enterprises which will in turn provide jobs for other unemployed youth in the District.

He added that the Assembly will continue to organize community-based workshops in various fields for residents especially women adding that “women play significant role in the homes and so if you educate or train a woman, she’ll turn back to support her husband, children and the community at large”.