TEWU to resume strike if meeting with GES, other stakeholders fail to yield results

The Teachers and Educational Workers Union (TEWU) has stressed that contrary to reports, it has only suspended its strike action and not called it 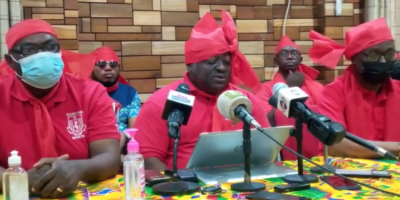 The Teachers and Educational Workers Union (TEWU) has stressed that contrary to reports, it has only suspended its strike action and not called it off.

The Union at a news conference on Tuesday announced that it will embark on an industrial strike today, Wednesday, January 5, 2022, to demand arrears in their professional development allowances.

Hours into the strike, news broke that the TEWU leadership have called off the strike action.

However, speaking to TV3 this afternoon, TEWU General Secretary Mark Korankye has emphasised that the strike has only been put on hold.

According to him, the decision was taken following a meeting with officials of the Ministry of Employment and Labour Relations, Ministry of Education and the Ghana Education Service (GES).

He said should their demands not be met, TEWU will immediately resume the strike.

“The bottom line is that we want the good for our members, that is why we are having to take this decision to suspend the action that have embarked upon just this morning so that the committee can start work.

“As per the labour laws and the Labour Act, you cannot negotiate whiles you are on industrial action and that is why leadership thinks that if management now is willing and reedy to accept the committee and make the committee to work, then it is appropriate for us to also put on hold this action, give ourselves sometime within which we expect that the green light will be given for our members to benefit from what they have been denied of all these while.

“They should not call off the strike, they should suspend the action. Suspension in the sense that we have the potential of resuming if nothing comes out of the committee’s work, that is why we call it suspension,” Mark Korankye shared.

From the demands of TEWU, the over 35,000 members who withdrew their services today want to be paid GHS600 each as professional development allowance.