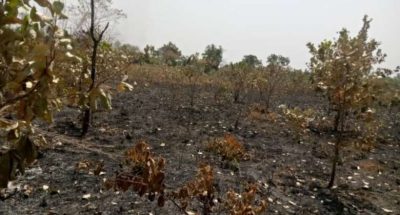 Mr Jordan Owusu, Chief Executive Officer of De Jordan Agro and investment has lost 120 acres of his cashew farm at “Torgbui Kope” near Kparekpare in the Krachi East Municipality of the Oti Region as a result of bush fire.

Mr Owusu told the Ghana News Agency (GNA) that the 120 acres cashew farm was his lifetime investment and was burnt down by a bushfire in the forest, of which the cause was unknown in the early hours of Monday.

He said it is the only source of income, “as it brings an average annual income of GH¢40,000, which is used to cater for my siblings’ education as well as taking care of my mother”.

He said it will take many years before he could rebuild the farm he totally lost as the cashew tree is one of the many permanent trees that are uneasily replaceable.

He stated that the incident had been reported to the Ghana National Fire Service (GNFS), Ghana Police Service, and Agric Extension officers for quick intervention.

Mr Owusu is hoping to soon hear from both GNFS and the Police and know how to work on plans to revive the farm again.

He said the cashew farm is the only source of his livelihood and has never known any trade apart from this.

“My late father, Nana Owusu, the then chief of Kparekpare died and left behind the farm for five of my siblings who are still schooling.”