The UN expects Guinea to return to civilian rule in a "reasonable timeframe", its envoy for West Africa said Monday, but just how long that will be is

The UN expects Guinea to return to civilian rule in a “reasonable timeframe”, its envoy for West Africa said Monday, but just how long that will be is up to the people of Guinea.

Mahamat Saleh Annadif, the United Nations special representative for West Africa and the Sahel, told reporters the UN had no demands as to the duration of the transition after the coup that toppled president Alpha Conde on September 5.

“We have said: we want a reasonable duration, but the reasonable duration depends on the Guineans themselves,” he said during a one-day visit to Conakry, adding that the UN had condemned the coup and called for the release of Conde.

“It is a worrying phenomenon, which can be seen as a step backwards for democracy,” he said.

What “is causing this resurgence of coups? This is a question that must be asked of all Africa’s partners and all Africans.”

Guinea’s coup leaders are to meet with political actors, religious groups and representatives of mining companies from Tuesday to prepare for the formation of a government, they said on national TV late Saturday.

The meetings are part of the promised period of consultation to set a framework for transition to civilian rule.

Guinea is one of the world’s biggest producers of bauxite, the ore used to make aluminium. It also has iron, gold and diamond deposits, but remains one of the poorest countries in the world.

The coup has helped send the price of aluminium to its highest level in 13 years, reaching $3,000 a tonne on Monday on concerns the political crisis would disrupt global supplies.

Annadif also said he had seen Conde: “We made sure of his safety and his health, he is doing well.” 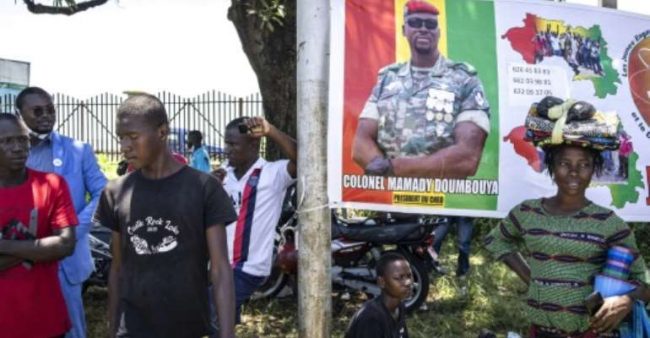