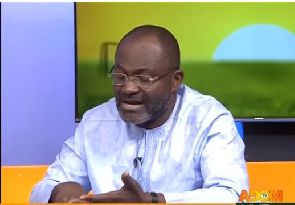 These are words of encouragement to Ken Agyapong - "Nananom have keenly followed your struggles and spirited attempts to expose dishonest politicians,

These are words of encouragement to Ken Agyapong – “Nananom have keenly followed your struggles and spirited attempts to expose dishonest politicians, criminally minded journalists, media houses, individuals, and corrupt groups in Ghana”.

Honorable, many times, Nananom have watched the agonizing expressions on your face as you try to restrain yourself and even be courteous to people like Kwasi Twum and his media empire’s watchdogs, some of whom are very corrupt as some politicians and civil society organizations.

“You have given reasons that Kwasi Twum is your “Akonta“ (brother in law), hence you don’t want to ruffle any feathers or start any confrontation with his media empire, and by extension, directly or indirectly with him”.

However, Nananom wishes to reaffirm that they are still true custodians and strong believers in our sacred indigenous diplomatic traditions, culture and norms. Therefore, they absolutely support and understand your point on wanting to let sleeping dogs lie relative to some infractions of journalists, radio or TV stations who are shamefully and desperately trying so hard in their evil, criminal and condescending attempts to destroy your name and hard-won reputation. Some of us, who are discerning understand your crusade to make Ghana great again.

Indeed, we know you are not detached from our indigenous diplomatic traditions, culture and norms. However, to the best of Nananom’s knowledge and of course, chagrin, Kwasi Twum hasn’t deemed it fit to reciprocate this kind gesture. He has failed, so are others, who woefully do not caution media outlets or sanction employees who continually drag your name and hard won reputation into the mud.

Nananom vividly saw the pain in your eyes when you recently said and rightly so, that “you don’t know what some media outlets in Ghana whose names you provided, wants from you”. That was during one of your usual TV discussions with Omanhene Kwabena Asante on Adom TV.

Honourable Ken Agyapong, be aware that Kwasi Twum has built his whole life, name and reputation in an industry which you also have formidable and vested interest in- the media industry. Kwasi Twum is your competitor and seems not prepared to accord you sane courtesies of being his “Akonta” as you have accorded him over the years (does that ring a bell honourable?). And indeed as an astute businessman that you are, you should periodically not expect anything better from your competitor, especially from our part of the world called Ghana.

Nananom knows you are a die-hard fun of Daddy Lumba and may be aware of his song -“yene wo sere kwa”. Strategically, the destruction of your name and hard won reputation no doubt significantly affect your stakes in the media industry, which invariably benefits Kwasi Twum and his media mafiosis working against you.

Going forward, Nananom advises that continue with your good works, which many will condemn, and even hate you, but they have admonished that your good efforts should not be truncated because of countless criticisms.

The words of Nananom are sacred. Obey and follow their prescriptions. And your enviable place in the shrine is reserved whenever you are ready to visit.