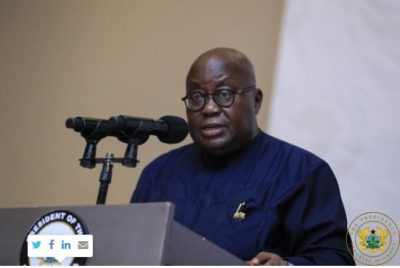 President Akufo-Addo has ordered the Ministry of Information to immediately publish the report of the Justice Stephen Alan Brobbey Commission of Inquiry that recommended the creation of six new regions to promote transparency.

The Ministry of Information is expected to put measures in place to publish the 398-page report this week.

The announcement comes after the Supreme Court last week dismissed the suit challenging the constitutionally of government’s decision to create six new regions.

Information Minister, Kojo Oppong Nkrumah, who briefed the media on Sunday during the bi-weekly press briefings organized by the Ministry of Information, said “even though Article 5 of the 1992 Constitution does not provide for the publication of the report of the Commission of Inquiry, the President has, however, instructed that in accordance with his firm views on transparency, the report should be published in full.”

The Minority in Parliament, who are subtly against the creation of the new regions, have insisted that they will have nothing to do with the new regions if the report is not made public.

The process of creating the new regions was initiated in accordance with Article 5 of the 1992 Constitution after petitioners from four regions namely Western, Brong Ahafo, Volta and Northern Regions, demanded the creation of new regions to be known as the Oti from the existing Volta Region; Ahafo from Brong Ahafo Region; Western North from Western Region; North East and Savannah Regions from the Northern Region.

The Justice Brobbey-led Commission commenced in-camera meetings with the petitioners at the Osu Castle, former seat of government in October 2017, and later travelled across the four regions to interact with the general public.

After the regional meetings, the Commission held its final sittings at the Accra International Conference Centre where the petitioners were granted the opportunity to make final inputs.