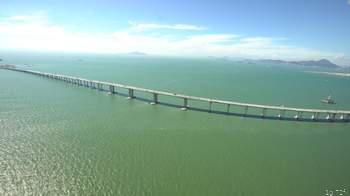 As we drive down the eerily deserted Hong Kong-Zhuhai-Macau Bridge, the murky waters of the Pearl River Delta stretch as far as the eye can see. T

As we drive down the eerily deserted Hong Kong-Zhuhai-Macau Bridge, the murky waters of the Pearl River Delta stretch as far as the eye can see.

There is no land in sight. Spanning 34 miles (55 km), this is the longest sea-crossing bridge ever built. Guo Xinglin, assistant director and senior engineer at the Hong Kong-Zhuhai-Macao Bridge Authority, meets us halfway along.

As we are buffeted by a strong wind, the tough conditions his construction crew experienced, as they perched on precarious platforms, working miles from land and high over the water, are evident.

Xinglin is visibly proud of his country’s monumental achievement. Due to open to the public this summer, it will connect a relatively small city on the Chinese mainland with the two Special Administrative Regions of Hong Kong and Macau. But since the bridge was first suggested in 2003, it has stirred controversy.

This massive span of concrete and steel is not just proof of China’s ability to build record-setting megastructures — it’s also a potent symbol of the country’s growing geopolitical ambitions. As tensions simmer between the mainland and Hong Kong and Taiwan, and China continues to claim territory in the South China Sea, the bridge can be seen as a physical manifestation of the Chinese leadership’s determination to exert its regional influence.