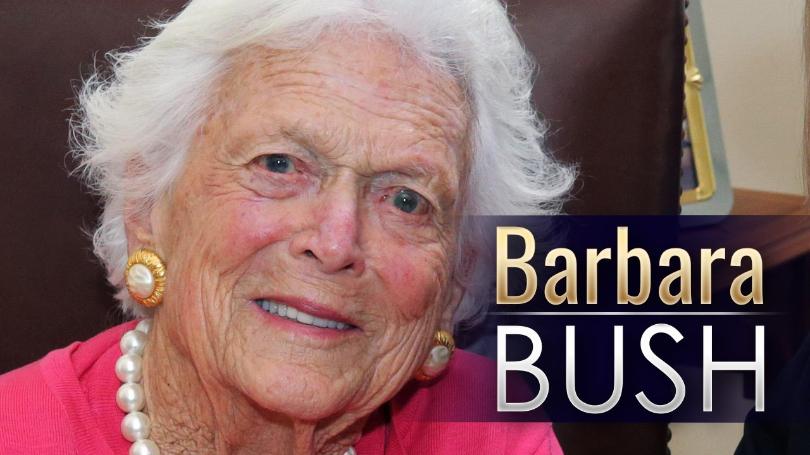 Barbara Bush, the former US first lady and literacy campaigner, has died at the age of 92. She was the matriarchal figure of a political dynasty th

Becca Opens New Body & Health Spa In Accra
GOVERNMENT HAS NOT PERMIT U.S TO USE GHANA AS A BASE – Nitiwul
Outcome of Nyantakyi’s saga crucial to Ghana’s image – Parliamentary Committee

Barbara Bush, the former US first lady and literacy campaigner, has died at the age of 92.

She was the matriarchal figure of a political dynasty that included two presidents – her husband George HW Bush and son George W Bush.

Mrs Bush, who was first lady from 1989 to 1993, had been in failing health for some time and had declined further medical treatment.

Tributes to her poured in from across the US political establishment.

Her husband, at 93, is the longest-lived US president. Their son, George, was elected in 2000 and served two terms as the nation’s 43rd president.

Barbara Bush, political matriarch and literacy campaigner
He said in a statement: “My dear mother has passed on at age 92. Laura, Barbara, Jenna, and I are sad, but our souls are settled because we know hers was. Barbara Bush was a fabulous First Lady and a woman unlike any other who brought levity, love, and literacy to millions.”

Mrs Bush pictured with her son in 2005
Mr Bush said his mother had “kept us on our toes and kept us laughing until the end”, adding: “I’m a lucky man that Barbara Bush was my mother. Our family will miss her dearly, and we thank you all for your prayers and good wishes.”

A statement from the office of her husband described her as a “relentless proponent of family literacy”.

Mrs Bush was also the mother of Jeb Bush, who served as governor of Florida from 1999 to 2007 and unsuccessfully ran for the White House in 2016.

As first lady, Mrs Bush went beyond the traditional role of a political spouse, founding the Barbara Bush Foundation for Family Literacy to help parents and children from disadvantaged communities to read and write.

‘Family rock’
She was a fierce advocate of civil rights and went against many of her husband’s Republican party supporters with her more liberal view on abortion rights.

In a statement from the White House, President Donald Trump said Mrs Bush would be long remembered for her devotion to country and family, “both of which she served unfailingly well”.

George HW Bush and Barbara Bush were married for 73 years
Barack and Michelle Obama described her as “the rock of a family dedicated to public service” and as “an example of the humility and decency that reflects the very best of the American spirit”.

Another former US president, Bill Clinton, said Mrs Bush was “feisty in support of her family and friends, her country and her causes”.

He said he and Hillary Clinton would “never forget the courtesy she and President Bush showed us”.

Mrs Bush was known for her snow-white hair and was dubbed “The Silver Fox” by her family.

As first lady, Barbara Bush met leaders from around the world
Mrs Bush also sparked a debate on gender equality in 1990 with an address to the all-women Wellesley College.

She told graduates: “Who knows, somewhere out in this audience may even be someone who will one day follow in my footsteps and preside over the White House as the president’s spouse and I wish him well.”

George HW Bush, who served as the 41st US president, suffers from a form of Parkinson’s disease and uses a wheelchair.

Barbara Bush often brought humour to an occasion, such as here in a photoshoot with celebrities
It was recently announced that Mrs Bush had declined further medical treatment after a series of hospital visits, but the statement did not reveal the nature of her ailments.

She said she wanted to spend her last days in “comfort care” with her family.

Mrs Bush was born Barbara Pierce, the daughter of Marvin Pierce, publisher of McCall’s magazine. She grew up in Rye, New York.

Bush presidents wade into Trump furore
She met her future husband in 1941 at a Christmas party in Connecticut and the couple celebrated their 73rd wedding anniversary in January this year.

They had six children including a daughter, Robin, who died of leukaemia aged three in 1953.

As well as George and Jeb, the other Bush children are Neil, Marvin and Dorothy.

Mrs Bush was one of only two women whose husband and son became US president, and the only one to have seen them both sworn in.

Abigail Adams was married to the second US president, John Adams, and was the mother of the sixth, John Quincy Adams, although she did not live to see their son elected.