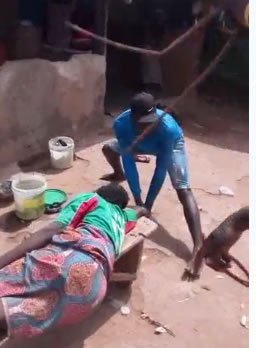 Otiko Afisah Djaba has cautioned that parents who violate the rights of children are liable to arrest and prosecution. The Minister of Gender, Chil

Otiko Afisah Djaba has cautioned that parents who violate the rights of children are liable to arrest and prosecution.

The Minister of Gender, Children and Social Protection, Otiko Afisah Djaba has requested the Domestic Violence and Victims Support Unit (DOVVSU) of the Police Service to immediately investigate a video in which a young girl was seen being horse-whipped in public.

Otiko Djaba wants the perpetrators -who could be identified in the video said to have been taken in Northern Region capital, Tamale- arrested and prosecuted.

In the disturbing video that has been circulated rapidly and widely on social media, two young adults were seen using horsewhips to lash the young lady while two others held her down.

According to the voice-over, the young male adults are her siblings and the brutal lashing was at the instance of their father.

Showing strong annoyance at the development, the Gender Minister in a statement issued Monday described “this act of brutality is unacceptable in Ghana 61 years on and cannot be countenanced by all of us.”

She warned: “No woman or girl should ever go through this harrowing and degrading experience in the name of discipline.”

Ms. Otiko Djaba further implored the public “to be our neighbor’s keeper and report any acts of domestic violence of the kind depicted in the video to the nearest Police Station or the Domestic Violence Unit in the Region for action.” 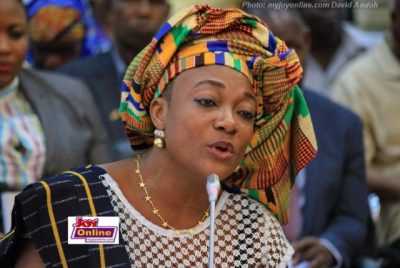 Read the full statement below:

HONOURABLE MINISTER OF GENDER, CHILDREN AND SOCIAL PROTECTION CONDEMNS THE BEATING OF THE GIRL IN TAMALE FOR COMING HOME LATE

The attention of the Ministry of Gender, Children and Social Protection (MoGCSP) has been drawn to a disturbing video posted on social media purporting to show a young lady being horse-whipped in public by a young adult while two others held her down. According to the voice-over, the young male adults are her siblings and the brutal lashing was at the instance of their father. We unreservedly condemn this shameful act circulated on ghanaweb.com and other media platforms the video of this girl who was being whipped and kicked for coming home late, and call on the Ghana Police Service and the Domestic Violence and Victim Support Unit (DOVVSU) to immediately investigate and prosecute this matter as the perpetrators are identifiable.

While the Ministry respects parents’ rights to discipline their children, we wish to caution parents that these rights are governed by law as contained in the Children’s Act 1998 (Act 560), and parents who violate the rights of children are liable to arrest and prosecution. The extreme acts of violence administered on this young female under the guise of discipline, would qualify to be described as a serious violation of her inalienable rights as a citizen of Ghana, who should not suffer such violence, under any circumstances. There are several forms of non-violent punishments that could be meted out to errant or wayward children without further damaging them through physical injury or psychological and emotional trauma.

I would like to take this opportunity to remind Ghanaians that gender-based violence is an offence and punishable by law irrespective of whether you are a father, husband, boyfriend, brother, mother or relative. No one is above the law. Section 3 (2) of the Domestic Violence Act provides that “a person in a domestic relationship who engages in domestic violence commits an offence and is liable on summary conviction to a fine or a term of imprisonment of not more than two (2) years or to both.

One would have thought that after almost 70 years of the passage of our Criminal Code, Ghanaians would have appreciated that physical abuse, especially against a female, is a criminal offence and punishable by law. With a high incidence of gender-based violence in domestic settings through the decades, it became necessary to pass the Domestic Violence Act in 2007, to remind ourselves that abuse of whatever kind at home is prohibited and punishable by law.

It is therefore incomprehensible what recently happened to the young lady at Tamale by her brothers captured on ghanaweb.com. Brothers who are supposed to protect their sister from harm rather became her abusers and gleefully assaulted her physically in such a barbaric and humiliating manner in the presence of many. The laughter of the video person is worrying and the fact that the bystanders did nothing is of serious concern. It reminds us of the young girl who was alleged to have stolen something, who was stripped naked in Kumasi market last year and brutalized whilst bystanders jeered and or just stood by, the alleged witches who were beaten and burnt to death, the young army officer, Major Adam Mahama who was beaten, stoned and burnt to death and girls who have been videoed whilst being gang raped. The psychological trauma of the girl or person being abused can only be imagined.

Needless to say, this act of brutality is unacceptable in Ghana 61 years on and cannot be countenanced by all of us. No woman or girl should ever go through this harrowing and degrading experience in the name of discipline. It is our collective responsibility to ensure that Ghanaians after 61 years of independence, must respect and protect the rights of the vulnerable. Women and girls have the same rights as men and boys in Ghana. Children and young persons must also remember that rights go with responsibilities and so must learn to be responsible for their actions. However, in as much as parents and carers of children, have to discipline their children, it must be done with their best interest in mind and without physical, psychological or mental abuse of their rights. Children have rights and those rights must be respected. Children must be brought up to be obedient, respectful and disciplined without the abuse of their rights.

The Ministry of Gender, Children & Social Protection wishes to inform the public of our ‘Helpline of Hope Call Center’ with toll free lines 0800 800 800 and 0800 900 900 for the reporting of complaints and grievances. We will continue to collaborate with the Police, the DOVVSU, the public and Social Welfare Officers to stamp out the rising incidence of the molestation of children, especially females, under the guise of discipline to enable us better ensure that we protect the rights of all Ghanaians, in particular the most vulnerable, weak, marginalised and discriminated against to develop a society of Ghanaians Against Child Abuse (GACA).

Once again, the Ministry implores all Ghanaians to be our neighbor’s keeper and report any acts of domestic violence of the kind depicted in the video to the nearest Police Station or the Domestic Violence Unit in the Region for action. We challenge you to take a stand and be a Ghanaian Against Child Abuse and a HeForShe Ambassador. Be an advocate in your community and SAY NO to gender-based violence. Thank you.