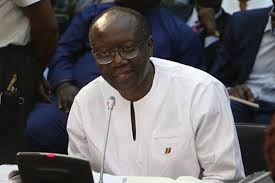 Finance Minister, Ken Ofori-Atta, has stated that job creation is the fulcrum around which the Nana Addo Dankwa Akufo-Addo led administration formulat

Finance Minister, Ken Ofori-Atta, has stated that job creation is the fulcrum around which the Nana Addo Dankwa Akufo-Addo led administration formulates its policies and programmes.

Mr Ken Ofori-Atta said though the government inherited a challenged economy, it remains committed to the job creation agenda which it campaigned on.

“For our government, job creation is the prism through which we ultimately view all our policies and programmes,” he said at the opening session of the Fifth Africa Think Tank Summit in Accra yesterday.

The three-day programme on the theme “Tackling Africa’s Youth Unemployment Challenge: Innovative Solutions from the Think Tanks”, brought together participants from across Africa and aims at proposing strategies and actionable recommendations for Think Tanks to meaningfully contribute to job creation on the continent.

According to Mr Ofori-Atta, Think Tanks in Africa have a role to play and must not leave the policy makers with the sole responsibility of finding solution to the unemployment conundrum on the continent.

“You as policy think tanks can provide advice on policy options and innovative solutions available to successfully tackle youth unemployment,” he told the gathering urging them to make available their research findings to governments and policy makers for “sound decision making.”

Identifying what may be the cause of Ghana’s unemployment challenge, the Finance Minister said it stems from “our economies’ failure to create employment opportunities at a rate commensurate with the growth in our youth population and in particular with the growth in tertiary and secondary school graduates.”

He mentioned government’s flagship programmes; Planting For Food and Jobs, One District, One Factory, and the soon to be launched Nation Builders Corps as some of the interventions introduced by the government to tackle unemployment in the country.

“So the Think Tanks should really prioritise the critical challenge of youth unemployment and join government in finding the solution”, he said and reiterated government’s commitment to the works of the Think Tanks as policy advisors of government.

The Executive Director for the Centre for Institute of Democratic Governance, Dr Emmanuel Akwetey, in his welcome address, urged his colleagues to renew their minds on job creation and offer practical solution to what he said is the biggest challenge of Africa’s youth.

He decried the perilous journey by Africa’s youth through the Mediterranean to Europe attributing it to the lack of jobs in the respective countries.

Professor Emmanuel Nnadozie, the Executive Secretary of the African Capacity Building Foundation, organisers of the summit, on his part called for support for Think Tanks in the discharge of their duties.

He said governments on the continent must not shy away from their responsibility to the youth adding “they (youth) are a strong pillar of the various economies.”