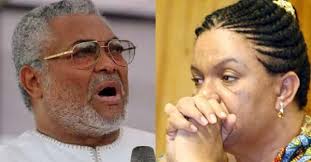 Newspapers Headlines: Friday, April 27, 2018.
There is Greatness In Everyone.
Asunafo South NPP poised to win with a United front

Former NDC Foreign Affairs Minister Hanna Tetteh-Kpodah has in a fit of anger handed a menacing rebuttal to former President Rawlings describing him as suffering from a compulsive disorder.

The former Minister was replying to comments by Ex-President Rawlings over the weekend claiming she (Hanna Tetteh) had maltreated his wife, Nana Konadu Agyeman Rawlings on several occasions.

“One time, in fact twice, that woman had turned herself into a Champion Jockey at congress meetings. The first time was in Tamale when she insulted my wife, second time somewhere.” He revealed.

The Founder of the National Democratic Congress (NDC) disclosed this in an address delivered at a Town Hall meeting of cadres and NDC activists at the Arts Centre in Accra last Saturday.

Mr. Rawlings claimed that the former Minister (Hannah Tetteh) showed disrespect to the former First Lady at several high profile events and once squeezed Mrs. Rawlings’ hand during a handshake at an independence anniversary parade gathering.

In a response, Hanna Tetteh has called on all to disregard “Rawlings’ rants” saying the former President and founder of the National Democratic Congress is suffering from Obsessive Compulsive Disorder, a chronic and long-lasting medical disorder in which a person has uncontrollable, re-occurring thoughts and behaviors that he or she feels the urge to repeat over and over.

Describing it as a psychiatric issue, she claims the former President is fast losing control of himself and his thoughts.

“I am not on a war path with Rawlings, I served under him dutifully but this path of vengeance he is charting will not help anyone. I cannot recollect a single occasion where I have consciously disrespected his wife, it will be right for him and us all to treat his recent statement without any seriousness.” She replied angrily.