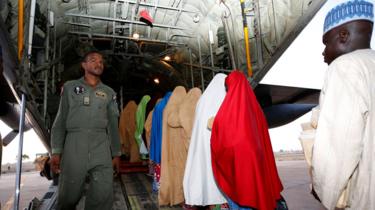 The girls were flown to and from Abuja on a military plane More than 100 Nigerian schoolgirls, most of those recently kidnapped by Boko Haram, hav

More than 100 Nigerian schoolgirls, most of those recently kidnapped by Boko Haram, have gone home to their families, four days after being freed.

The jihadist group abducted the girls from the town of Dapchi in February.

After their release from captivity and a brief emotional meeting with their parents, the schoolgirls were flown to the capital to meet the president.

The girls – warned by Boko Haram not to return to school – were escorted back to Dapchi by Nigerian soldiers. 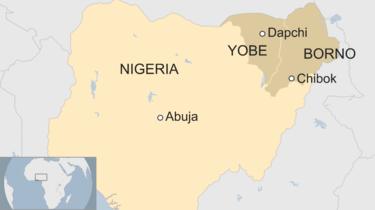 The schoolgirls, who were kidnapped from their boarding school on 19 February, were reportedly released by the side of a road almost five weeks later.

A total of 110 girls were originally kidnapped, but five did not survive the ordeal and one other – a Christian who refused to convert to Islam – is still being held.

The Nigerian government has said it will not abandon the “lone Dapchi girl”.

“The Buhari administration will not relent in efforts to bring [her] safely back home to her parents,” a statement said.

Two other people – a boy and another girl from Dapchi – were freed at the same time, officials also said.

The government denies claims that Boko Haram was paid a ransom for the girls’ freedom, or that there was a prisoner swap.

Information Minister Lai Mohammad told the BBC’s Focus on Africa that the girls’ return was part of ongoing talks about an amnesty in return for a ceasefire.

The girls arrived in Dapchi aboard a convoy of five buses at about 13:30 GMT. Their parents were already waiting expectantly when they arrived. There was joy and jubilation as they jumped into their parents’ embraces.

The newly-released school girls had spent three days with the Nigerian authorities after being released by Boko Haram last week.

But the parents of the lone Christian girl were isolated from the celebrations. Their daughter is still being held by the jihadist group for reportedly refusing to convert to Islam.

Meanwhile, the warning by the militants that the freed girls should never return to school hangs a shadow over their return home.

President Buhari’s administration had been under pressure to resolve the Dapchi abduction, which revived painful memories of the 2014 kidnapping of 276 girls from the town of Chibok.

Former Nigerian President Goodluck Jonathan was criticised for his handling of the abductions from a Chibok school, some 275km (170 miles) south-east of Dapchi.

More than half of the girls have been returned but 100 remain missing.