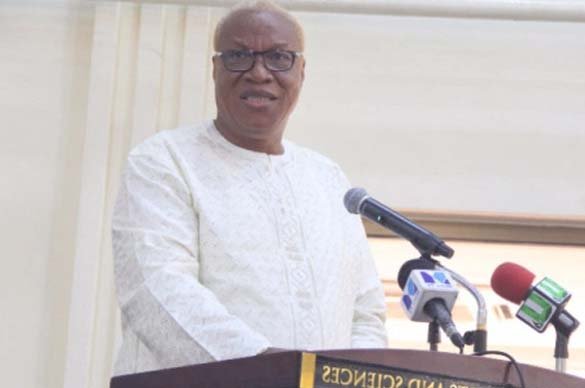 Professor Joshua Alabi, a former Vice Chancellor of UPSA, who happens to be a former Manager of the Black Stars, has presented a list of recommendatio

Professor Joshua Alabi, a former Vice Chancellor of UPSA, who happens to be a former Manager of the Black Stars, has presented a list of recommendations to the football authorities as solutions to the current brouhaha surrounding Ghana football.

The respected former University don is proposing a list of changes that must be factored into a new constitution for the management of football. His recommendations include an independent board for the management of the premier league with superior powers, checks and balances between the board and the FA, and a time bound resolution of all disputes which may arise in football.

“Congress of the GFA which is a meeting of all stakeholders must admit to shortcomings inherent in the current constitution, and table proposals to correct them. A new constitution which encourages checks and balances, gives autonomy to the PLB, fast tracks resolution of disputes within hours, and protects our continental or international representatives is the way to go,” he stated.

Prof Alabi in a statement issued Tuesday recounts his time as one of the five Executive Members of the Ghana Football Association (GFA) and also as the General Secretary of GHALCA and on the strength of that, proffers drastic reforms which will revolutionise the management of football in the country.

Below is the full statement:

The current state of GFA affairs calls for drastic reforms, just as it happened in 1994.

After a poor showing in Tunisia, leading to an early exit of the star-studed Black Stars from the African Cup of Nations, Ghanaians were outraged. And as a football nation, the leadership of football needed to act, and swiftly. A telephone conference with my Chairman and other leading members of GHALCA was held.

Soon after that, in my capacity as the Ag. General Secretary of GHALCA, I wrote to summon a General Meeting of members. That meeting found solutions to the problems of football management in this country; and the proposals finally led to the introduction of Club Representatives into the Five Member Management Board of the GFA, to help manage our game.

Our position was simple: that government cannot continue to solely manage football in this country by appointing all the members of the Management Board of the GFA. After series of meetings, government accepted the proposals of GHALCA.

The reforms saw a better management of football, culminating into the formation of a new Black Stars team, which became the first to qualify for the 1996 African Cup of Nations tournament in South Africa.

The Abedi-Pele-captained side won the hearts of Ghanaians, including many on the continent, during the football festival in South Africa; until the agenda “Host and Win At All Cost” of the Late President Nelson Mandela worked against us, leading to our defeat in the semi finals. As the GFA Member responsible for the Black Stars together with my Chairman Nana Sam Brew Butler, we led the team back home and gave our accounts to the Government, the Executive Council of the GFA and GHALCA.

Thoughtful reforms in the management of the Association is necessary at a time such as this. Proactive and pragmatic reforms are needed, in order to achieve the excellent heights we set for ourselves as ofspring from Dr Kwame Nkrumah.

The extent of damage revealed in the exposè shown in the premiered sting operations video by Tiger-I, calls for drastic reforms which will tighten the loose ends of the systems and regulations.

As a country, leadership can choose to make it easier on ourselves or otherwise by starting such reforms now, or hope to do so later, perhaps in months. Leadership must however take a definitive decision on this, and do so urgently. An independent body must be formed to meet with the leadership of GHALCA to fashion out some proposals for discussion and adoption at Congress. This would convince FIFA not to impose any ban and would fast track the process to a resolution. Any resolution must continue to internationalize our football and not to make it only local, since it is the aspiration of every player to play international football, and Ghanaians would like to see our teams also on the international stage.

Congress of the GFA which is a meeting of all stakeholders must admit to shortcomings inherent in the current constitution, and table proposals to correct them. A new constitution which encourages checks and balances, gives autonomy to the PLB, fast tracks resolution of disputes within hours, and protects our continental or international representatives is the way to go.

The results from such measures will lead to rapid progress. That new constitution will restore confidence in the game; and guarantee fair play. Should it be done well, it shall lead to producing a dazzling Ghanaian team ready to conquer Africa in the next few years.
We need solutions.