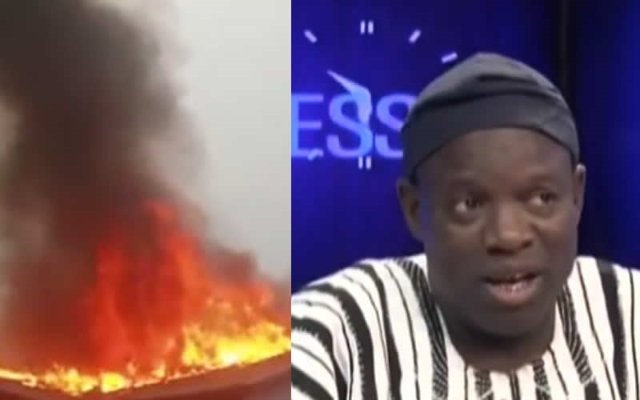 Salaga disturbance will be treated as crime – Minister condemns

Northern Region Minister, Salifu Saeed, has said rampaging youth that torched the office of the governing New Patriotic Party (NPP) in Salaga South on Tuesday will be dealt with according to law.

-The youth set fire to a party office of the NPP in the area and also tore down billboards that had President Addo Addo Dankwa Akufo-Addo’s photo and set that too on fire.

Salifu Saeed, who has been appointed by the President as the caretaker minister for the newly created North East and Savanah regions, said razing down billboards and setting fire to buildings are strictly criminal.

“The security [personnel] are on the ground and by [Wednesday] I am going to hold a REGSEC [Regional Security] meeting in the afternoon…and those who are destroying properties we are going to be treated this as a criminal matter,” he said on current affairs programme, PM Express.

He said although snippets of agitation were expected ahead of the selection of capitals for the newly created regions, Tuesday’s violence was unacceptable.

“If you have your concern, we have leaders there…so they needed to address the issue properly. The methodology they used was not right,” the Minister condemned.

He said although calm has been restored, chiefs and youth groups have been contacted quell the agitation among the youth.

Displeased by the President for selecting Damango instead of Salaga as the capital of the Savanah Region, the rampaging youth went on a rampage.

They argued that the people of Salaga South showed faith in the NPP by voting the party’s parliamentary candidate, Salifu Adam Braimah as Member of Parliament.

They say the choice of Damango which voted for a National Democratic Congress (NDC) candidate Adam Mutawakilu, does not reward the peoples’ faith in the NPP.

Roofing, fridges, windows, satellite dish and computers are among the many things destroyed by the fire.

Although there was police personnel present, they could hardly stop the angry youth.

Attempts by firefighters at the scene to douse the flames were also thwarted by the angry youths.

An eyewitness said pickaxes were brought in by the irate youth to pull down the building. 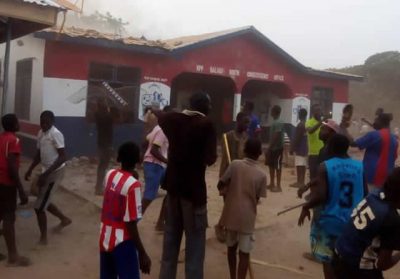 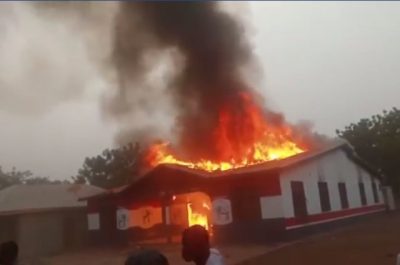 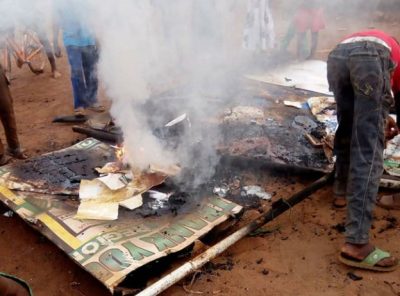