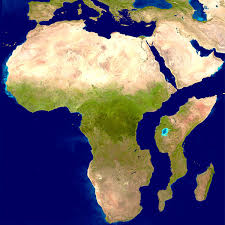 Eastern Africa is splitting from the rest of the continent in a geological event that will occur in millions of years, eventually leaving Africa

Eastern Africa is splitting from the rest of the continent in a geological event that will occur in millions of years, eventually leaving Africa without its horn.

The geologic rift running down the eastern side of the continent, which will be replaced with ocean, is widening at a faster rate than expected, geologically speaking.

And it may already be causing problems. Kenya’s busy Mai Mahiu road caved in after it developed a volcanic fault-line, the Kenya National Highways Authority told Daily Nation.

Geologist David Adede blames the split – where sections of the road sunk, endangering drivers and holding up traffic, according to The Star – on volcanic activity. 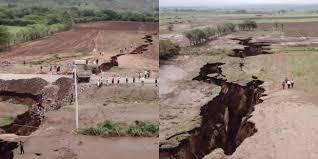 In an interview with NTV, he said: The Great Rift splits Africa into two plates. With what is happening we have established one plate which is the Somali plate is moving away from the other plate at a rate of 2.5cm.

In the near future if this happens we shall have Somali plate separating from the other Nubian plate.

He explained that after the road cracked, a big hole opened up and swallowed all the water (there had been recent flooding in the area), resulting in more cracks in the ground.

He added: There is a great need for researchers to conduct a comprehensive study on the terrain of this region so that they can advise on where roads and residential buildings can be established.

This can play a key role in dealing with such natural disasters should they happen.

The two massive chunks of land – the Nubian plate and the Somali plate – are separating by a few millimetres each year due to a ‘superplume’, a giant section of the earth’s mantle that carries heat from near the core up to the crust.