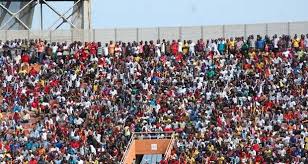 Ghana is set to mark the 17th anniversary of the May 9th soccer disaster that claimed 127 lives at the Accra sports stadium after a midweek league match between Accra Hearts of Oak and Kumasi Asante Kotoko in 2001.

History of the disaster

The Accra Sport Stadium disaster occurred at the Ohene Djan Stadium, Accra, Ghana on May 9, 2001. It took the lives of 127 people, making it the worst stadium disaster to have ever taken place in Africa.

Ghana’s most successful football teams played that day, the Accra Hearts of Oak (The Phobians) Sporting Club and the Asante Kotoko (Porcupine Warriors) Sporting Club, so officials anticipated upset so had taken extra security measures. Accra had two late goals and a referee would call 2–1 Accra, resulting in disappointed Kotoko fans throwing plastic seats and bottles onto the pitch. The police responded by firing tear gas into the crowd. Panic and a stampede ensued as fans tried to escape but gates were locked and the stadium’s compromised design left a bottleneck and fewer exits than originally planned. Ghana Institute of Architects called the stadium a “death trap.” After the hour-long ordeal, it was found that 117 deaths resulted from compressive asphyxia and 10 fans died from trauma.

Fan, Abdul Mohammed, had passed out from the tear gas and moved to a morgue, thought to be dead. He became conscious after someone stepped on his foot, narrowly missing a burial.

Reports claim that medical staff had already left the stadium, as the incident happened near the end of the match. Some gates were locked, preventing escape.

An official inquiry blamed police for over-reacting with reckless behaviour and indiscriminate firing of plastic bullets and tear gas. It also accused some officers of dishonesty and indefensible laxity. Six police officers were charged with 127 counts of manslaughter afterwards, but the court ruled that the prosecution had failed to make a case and that the asphyxia may have been caused by the stampede and not the tear gas.

The commission of inquiry recommended improvements to stadium security and first aid facilities, and that nationwide rapid response teams should be set up.

Accra Sports Stadium was renovated in 2007 according to FIFA standards. Politics may have deferred the National Sports Council’s attention to the stadium and 15 years later it again is in disrepair.

Since 2001 corporations and philanthropists including former Asante Kotoko chairman from 1999 to 2003, Herbert Mensah, have memorialized this tragedy with a fund, Stadium Disaster Fund, and a series of events in Kumasi. The events include paying respects to families of victims, and their 148 children, their invitation to the Otumfuo’s birthday at Manhyia Palace, prayers in the local Central Mosque, donations to the needy, the laying of a memorial wreath and a memorial march called ”May 9th Remembered Street Walk.” In 2016 an annual memorial “May 9th Cup” football competition was created.Mensah has appealed to the government to memorialize that May 9th, to no agreement. In 2017 the memorial events were themed “Embrace the Day.

A bronze statue was erected outside the stadium of a fan carrying another fan to safety with the inscription title, “I Am My Brother’s Keeper” in honor of the victims of that tragedy. 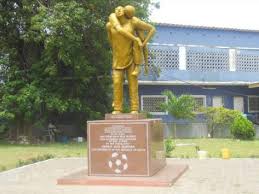 Fans who attend matches at the stadium now chant “Never Again”! Never Again!” to remind themselves of that day. 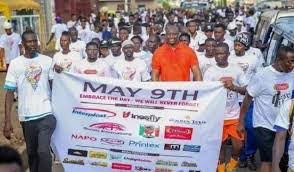 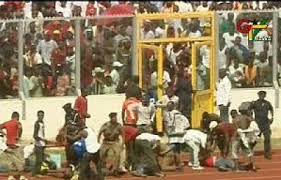 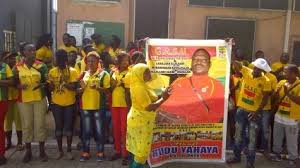