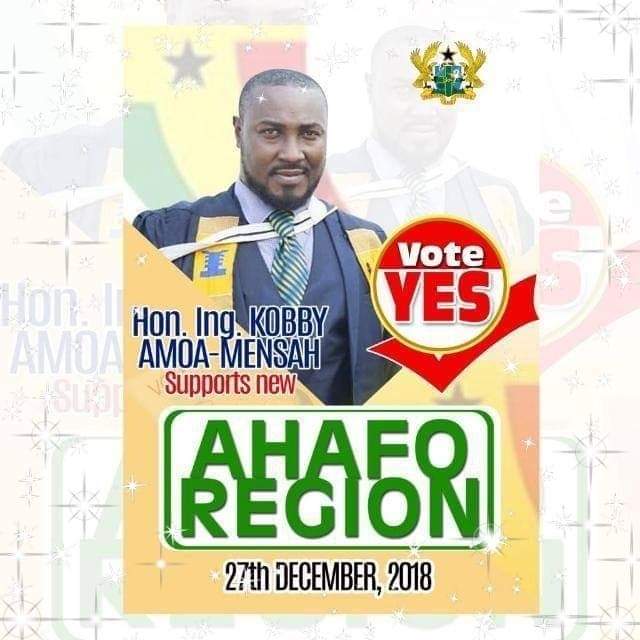 A case for the capital of Ahafo by Hon. Ing. Kobby Amoa-Mensah

A Case for the Capital of Ahafo by Hon. Ing. Kobby Amoa-Mensah.   It has been the delight of many in Ahafoman following the positive re

It has been the delight of many in Ahafoman following the positive results that emanated from the just ended refrendum which allowed for the creation of a new Region called Ahafo.

To most denizens of the Ahafo enclave, this is a dream many have always wished for taking into context theme historical content post 1935.

In the minds of many in Ahafo, Ahafo had always existed as a region . This faith is what has yielded to the creation or re-birth of Ahafo.

The history of Ahafo is etched with moments or disunity, bickering and internal fighting to some extent by it own people.

It was of great relief and happiness therefore, when it became apparent that, with a single voice in harmony the people of Ahafoman had vowed to clinch a status which they had failed to attain in the past.

On the onset, prior to the campaign, two major challenges were rightly identified by Nananom and opinion leaders.

First and foremost, *it was noted that partisan politics could derail the goal in sight*. To avert this risk, a strategic decision to deploy members of the two main political parties as campaign team members was devised. It was encouraging and inspiring to see NDC And NPP political activists share the same vehicle to spread the YES message. This was very effective.

The *second major problem pertained to the choice of the capital town.* Passions could be seen to be aroused in conversations on the streets of and on Ahafo Social Media Fora. It was therefore wise, that an informal instruction was made to commentators to desist from contemplating on the choice of the capital. The  elders of Ahafo in their proverbial wisdom said  *’Let us finish with the first step, before we consider the second step’.* This simply meant that, we should unite and stay focussed to attain the  resounding YES vote and after that we could think of the choice of location for the capital of the new ahafo region.

This is where we are now and there seems to be an   uneasy silence amongst the good people of Ahafo. We are patiently waiting for the capital town.

It must be said that Goaso, Mim, Duayaw Nkwanta, Bechem, Hwidiem-Kenyase all submitted bids to be selected as a capital. *Conspicuosly absent from the list is the town of Kukuom.* The reasons for not submitting a bid are believed to be in the interest of Ahafoman.

In our research, we came to learn more about the vital role Kukuom has played towards the independence and survival of Ahafoman as a State.

All the bidding towns have strengths and weakness which go for and against them in their quest to be selected as the capital of Ahafo Region. The following are  the research analysis results carried out by ahafonews.com

The town Goaso is widely accepted by most  Ahafo citizens and residents as the most popular and central reference point when talking about Ahafo.  It is strategically surrounded by major Ahafo towns such as Mim, Kukuom, Akrodie, Mehame, Dadiesoaba etc.

This strategic location has historically helped Goaso to over the years metamorphosize into a vibrant commercial, financial and business hub. This status is categorically unrivalled.

Its Municipal status puts it on a higher pedestal relative to other towns in Ahafo.

Goaso also has significant infrastructure for governmental institutions which allows it to push for the status of a regional capital. The nature of existing road networks generally allow for easy access to it from other towns with relatively minimal challenges based on a transportation gravitational model concept.

The Achilles heel of Goaso, other competitors claim relates to the issue of land availability. Apparently Goaso has no land. This disadvantage seems to be the major fear that supporters of Goaso believe may tilt sideways their chances. Is this founded or not?

The town of Mim, is in the same constituency as Goaso, although Mim has less infrastructure and governmental instititions, it has the advantage of being the host to a good number of  industrial and agribusiness firms. Mim Cashew, the defunct Mim Timbers and Ayum Forest Products Ltd all affected the lanscape of Ahafo. Although the industrial sector brought glory to the town, the industrial prowess has been dwindling in the recent past. Supporters of the Mim Bid hold the view that, if Mim were to be made the capital it would serve as a vital catalyst to revive industries in  Mim and Ahafo in general. It must also be noted that，Mim has vast lands relative to Goaso. Mim deems its access to land as another major reason why it deserves to be the capital. It is however important to note that, the biggest challenge Mim has is the fact that it is still deemed to be ‘under’ Goaso. This upheaval perception, is one which would practically not allow Mim to be a capital of Ahafo whilst Goaso is sidelined. Our sources indicate that this will not be well relieved by most people with ahafo interest. To surmount this, the concept of a twin town has been proposed according to some sources. Will this work? Our research shows that Goaso is not in favour of this proposal. Another twist to this twin proposal is that, if the basis for selecting Mim is based on land availability then Kukuom deservedly has vast land. More importantly, would it be fair to create a twin capital where both towns are in one constitiency, that is Asunafo South. Both arguements leaves Mim stranded. The only point to note here is that kukuom did not send in a bid. What are the considerations going on in the last 24hours before the pronouncement of The capital of Ahafo.

These two towns have smartly harnessed their stregths to put together a bid that most people never expected. A clear showcase of strategic planning and foresight by the two towns. It must be noted that the locations of these two towns although not very central To other ahafo towns  are accessible. Kenyase houses the Ahafo Mines of Newmont Goldfields Ghana Limited (NGGL) in Kenyase. Kenyase inevitably has the largest industrial base by capital investment in Ahafo. It also attracts a huge number of professionals with expertise that contribute to the development of the ahafo enclave. The mines have primarily overshadowed agriculture in the area. Hwidiem brings the strength of having reputable educational and health institutions that people in ahafo have  significantly benefited from over time.

Ahafonews.com sees this bid as the dark horse in the race. In the entire campaign it is fair to say these citizens have produced the most vibrant individuals who have championed the cause at significant personal costs. They  could this bid spring a surprise?

The fierce banter between Mim and Goaso could lead the decision makers to settle for a compromise which could  innure to the benefit of Kenyase-Hwidiem Bid.

Duayaw Nkwanta and Bechem are neighbouring towns.For the purposes of our discussion, both towns will be considered in the same space as a result of the relatively similar characteriatics they exhibit. Bechem and Duayaw Nkwanta are both sited on the boundaries of the newly created Ahafo region.Both are also sandwiched by the main Sunyani – Kumasi  Highway. Both towns are  very accessible via the Highway to and from other parts of the country. These two towns have very good infrastructure especially for the health and educational sectors.

They also enjoy significant vibrancy in terms of commercial activity and both towns are competing twins with a little rivalry but full of love.

The biggest challange to thier bid primarily is thier location. The rest of Ahafo would have to struggle to access the capital if they win. the hinterlands of Ahafo will be majorly disadvantaged if this bid wins. The fact that both towns are closer to Sunyani also means it would be unfair to site Ahafo’s capital so close to Sunyani and yet so far away from the majority of the people of Ahafo.

Our research shows that these twin towns stand to be at the forefront of health care provison and education in the region with a potential to  increase the patronage of hospitality business in its locality.

Who wins the capital?

Based on the analysis above, major indicators show that Goaso is in the lead and deservedly should be made the Capital of Ahafo region. Goaso has been seen by all true and fair citizens to have held the status of  capital of Ahafoman prior the refrendum. Why change it? The failure of Goaso’s bid will mainly be as a result of a stiff challenge from Mim. If Goaso does not buy the twin town capital bid concept ( Goaso- Mim), then the dark horses in the race (Kenyase-Hwidiem) will be laughing.

If Goaso is made the Capital, the following proposals could be helpful :

– Goaso should have the RCC and house the Regional minister

*It proposed  that Goaso should be  the  Capital of the new Ahafo Region  and all infrastructure spread across the region.*

With all these said, the people of Ahafo are very grateful to the President of the Republic of Ghana, Nana Addo Dankwa Akuffo Addo for making us witness our cherished ahafoman in our life time and we forward to a happy new Ahafo Region.