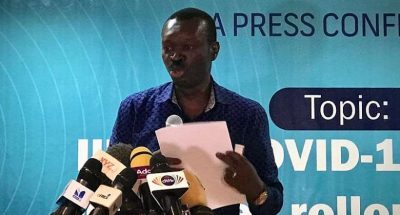 The Coalition for Public Health and Social Justice has dragged some 13 institutions to court for allegedly cowing their employees to take the covid-19 vaccine.

The coalition at its press briefing in Accra on Wednesday, February 9, 2022, said the 13 institutions comprised both private and public institutions who had insisted that their employees take the covid-19 vaccine.

The coalition made up of lawyers, scientists, doctors, pastors and businessmen and women have decided to go after these institutions that they believe are frustrating their employees.

Dr. Edem Senanu stated that mandatory vaccination is illegal as citizens have every right to reject the vaccine.

He argues that the mandatory vaccination is not backed by any executive instrument. “So the position of some employers to force their employees to take the vaccine or risk losing their jobs was very illegal.”

According to him, employees should be allowed to take the vaccine by choice and not threats.

Dr. Senanu added that the country could emulate the UK which he says have halted their mandatory vaccine roll out and are looking at natural immunity.

According to him, this was a country that had done more COVID-19 testing and yet, had halted its mandatory vaccine roll out.

The group believes that other drugs being used to treat COVID -19 symptoms should be researched thoroughly and used instead of government putting all its hopes on the vaccines.