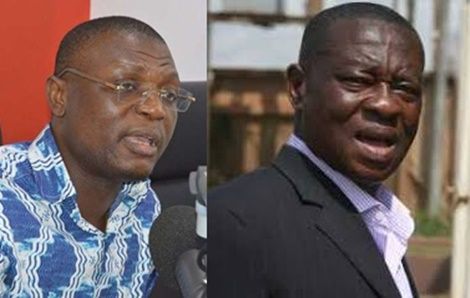 National Organizer of the opposition National Democratic Congress (NDC), Kofi Adams, has asked his predecessor, Mr. Yaw Boateng Gyan, not to dare compete against him for his current position.

He says he even doubts whether Yaw Gyan will contest again for an executive position in the party.

Mr. Kofi Adams asserts that with what he has put in place as National Organizer, he wonders if his predecessor or any NDC activist can have the temerity to contest for the position.

Though he was not able to disclose his intentions to seek a re-election as National Organizer, he urged his predecessor to contest for a different position in the party rather than the national organizer position.

Speaking on Okay fm’s Ade Akye Abia programme, he noted that the party currently is undergoing a restructuring process and with what they have put in place, It Will secure victory for the party in 2020.

“We have given the party a solid foundation to withstand any external attack,” Kofi Adams stated.

However in a sharp rebuttal, Yaw Boateng Gyan disclosed that his mind is made up and will surely contest for the National organizer position.

“Considering my past achievements as national organizer of the party and my contribution to the party’s development, i will contest….The decision to win lies with the delegates,” he added.

The National Democratic Congress (NDC) has rolled out its guidelines for the election of executive members at the branch, constituency, regional and national level throughout the country.

The elections which forms part of the party’s preparation towards Election 2020 would also help party members to elect its flag bearer.

General Secretary of the party, Johnson Asiedu Nketia has indicated that regulations have been designed to ensure the conduct of a free and fair election at all levels.

According to him, the guidelines were made pursuant to articles 36 and 40 of the NDC constitution with approval from the National Executive Council (NEC).

Breaking down the requirements, Mr. Asiedu Nketia said interested persons must be registered members of the party who have been active for two years. An aspirant for any executive position will also be asked to pay a filing fee of five Ghana cedis and be proposed by, at least, one person and seconded by two other people.