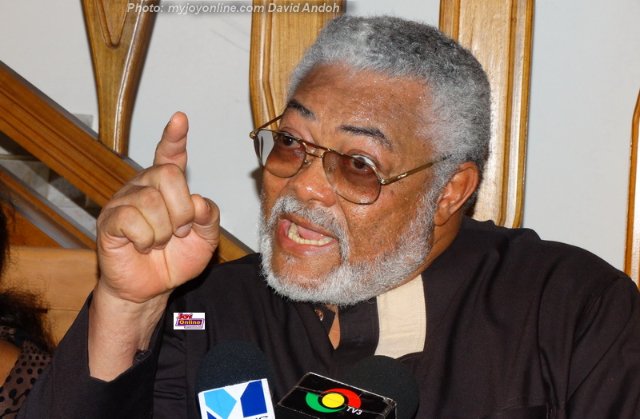 The Office of former President Jerry John Rawlings has denied making any public comments in relation to a controversial statement by Nigerian President, Muhammadu Buhari on his country’s youth.

In a statement issued Sunday, the Office of the former Ghanaian leader said Mr. Rawlings has not commented in support of President Buhari as has been reported widely on various media, especially in Nigeria.

President Muhammadu Buhari on Wednesday, stirred up a hornets’ nest, describing many Nigerian youths as lazy and always wanting freebies at the 25th Commonwealth Heads of Government Meeting in London.

He said, “About the economy, we have a very young population, our population is estimated conservatively to be 180 million. This is a very conservative one.

“More than 60 percent of the population is below 30, a lot of them haven’t been to school and they are claiming that Nigeria is an oil-producing country, therefore, they should sit and do nothing, and get housing, health care, education free.”

His comments are still generating a public backlash and the former Ghanaian leader does not want to be drawn into it.

Read the statement issued by the Communications Directorate of Mr. Rawlinigs and signed Kobina Andoh Amoakwa:

The attention of the office of Flt. Lt. Jerry John Rawlings, former President of Ghana, has been drawn to a post on various media, especially in Nigeria, professing his support for comments made by President Muhammadu Buhari on Nigerian youth.

The office wishes to state that former President Rawlings has made no comment whatsoever or issued a statement on the comments by President Buhari.

Any comments purportedly coming from Mr. Rawlings are false and a creation of individuals who wish to use the former President of Ghana’s name for their own political interests.

All official statements or comments by Flt Lt Rawlings can be found on his Twitter handle @officeofJJR or his Facebook page https://www.facebook.com/President.J.J.Rawlings/