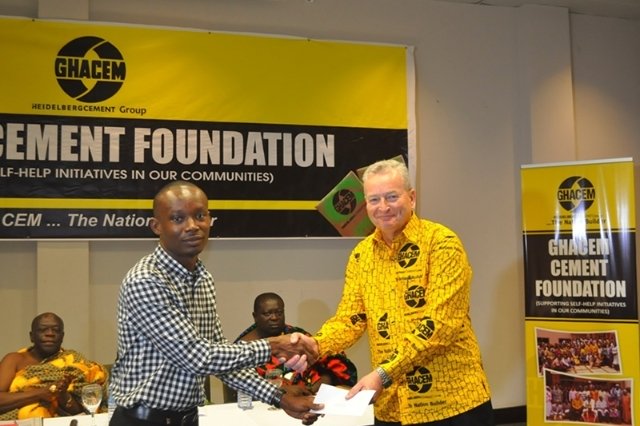 Ghacem Cement Foundation was established by Ghacem Limited in 2002 as part of its corporate social responsibility (CSR) to assist deprived communities to improve their health and educational infrastructure or build new ones.

The foundation has since its inception given a total of 550,000 bags of cement to about 5,000 communities across the country valued at a cost of GHS17.6 million.

The cement donation by the foremost cement manufacturer in the country is done annually to hand over the allocated bags to institutions across the country grouped into Southern (Central, Western, Western North, Volta, Oti, Eastern and Greater Accra Region) and Northern (North East, Northern, Savannah, Upper East, Upper West, Brong East, Brong, Ahafo and Ashanti Region) sectors as a support package for the institutions which are currently undertaken various infrastructural projects.

Beneficiary institutions are mostly found in deprived/remote areas of the country which makes Ghacem a Corporate Entity that stands tall in the socioeconomic development of the country.

Media men spoke with some representatives of beneficiary institutions who expressed their profound appreciation to Ghacem for being a live saver in the education and health sectors of the economy.

Mr Seth Brew Amankwa, Headmaster of Swedro Joyful Academy in Swedro disclosed he has been a beneficiary with two different institutions in Swedro and admitted education in the area has improved with more enrolment due to expansion in infrastructure with the free cement from Ghacem.

“I came into contact with the Ghacem Cement Foundation when I was the headmaster of Carolina International School here in Swedro. Our classrooms were small so we could not enrol more kids. With internally generated funds we started putting up a storey building and were at the foundation stage when Ghacem Foundation came to assist us with some bags. We received more bags thrice until the project was completed. We are glad to say we have even named the computer laboratory a ‘Ghacem Hall’.

I am now the headmaster at Swedro Joyful Academy and when I assumed office I realized the building was small and dilapidated as well. Last year during a rainstorm the roof even got wiped off making the situation worse. We applied for cement bags and we have been called today to receive our allocation. We are calling on all Ghanaians to support Ghacem by buying their products because this is the first time we have met such a foundation that is truthful and loyal to assisting deprived communities with free cement.

The Area Manager for Anglican Schools at Krobo Odumase, Venerable Michael Asiedu also attested to the fact that with the free cement from the Ghacem Cement foundation, the Krobo Odumasi area has seen development in education and health.

“Odumase last year had School feeding program so we needed a dining hall and kitchen. We started the project and Ghacem came with the support. The schools were also faced with serious infrastructural crises and deterred the kids from attending school. Teachers even threatened to leave but now with Ghacem support, the situation has improved and education has improved as well. 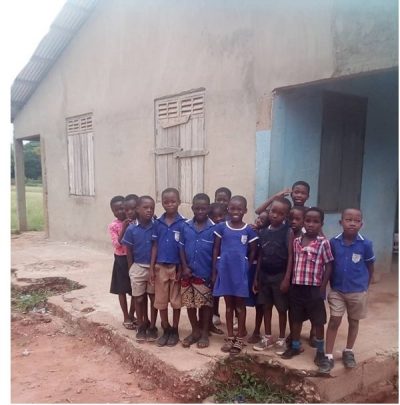 A total of 15,450 bags of cement valued at Gh. 499,000 were given to selected health and educational institutions in the Greater Accra, Central, Western, Western North, Eastern, Volta and Oti regions.

Welcoming representatives of beneficiary institutions, Prof. Audrey Gadzekpo said the objective of the cement donation was to support the government’s developmental agenda in ensuring development goes to every corner of the country. She congratulated the beneficiary institutions and appealed to them to use the cement judiciously for the purpose of which it was given.

Addressing beneficiaries, Mr Morten Gade said Ghacem sees the Cement foundation awards as an opportunity to appreciate the impact of its work especially assisting deprived communities of the country who are faced with inadequate resources and limited central government funding. “As investors, we look beyond short-term financial performance, as a result, our decisions on investment are not just about returns but about ensuring healthy, productive and sustainable economies and societies”

Ghacem he explained commits the amount of investment through the GCF to ensure institutions undertake the developmental projects that impact on lives. We are passionate about the strides that the Ghanaian economy has chalked over the past years and we believe that when corporate Ghana throws its weight solidly behind government the ‘Ghana Beyond Aid’ will be a reality sooner than expected”

Mr. Gade informed that being a good neighbor is one of the main pillars of the HeidlebergCement Group’s sustainability strategy as such although the creation of the six new regions will put a lot of pressure on the foundation to give more considering how development will be priority in these areas the company is committed to meeting the needs of the deprived communities and will do well within their means to serve every qualified application.

Ghacem he reminded in addition to its corporate social responsibility takes its tax obligation seriously as a good corporate citizen and in 2018 alone paid Gh. 268 million as direct and indirect tax to Government.

Mr Gade thanked Ghanaians for the strong support the company has received as the nation builder since 1967 and assured to solidify the commanding role and even do better.

On his part, Nana Prah Agyensaim VI, Chairman of the foundation said the annual donation of free cement by Ghacem is a clear attestation that Ghacem is the only cement company in Ghana that is generous “and they will continue to be generous provided they are given the right support such as the ban on importation of bagged cement which are also inferior. When these unfair trade practices are allowed Ghacem will not survive” he said and urged all present to patronize the 3 grades of Ghacem cement for a strong nation building.

Nana Prah Agyensaim VI disclosed that two types of application exist which includes: To rehabilitate an existing structure that needs work to be done and for new structures, the community has reached lintel level that needs support.

The procedure includes Original application letter from the Community or Head of Institution (The Chief, Chairman, Town Development Council, Head Teacher/Master, Doctor-in Charge or Medical Assistant/Administration and Head Midwife). Letter from the District Director of Education or Health. Letter from the DCE or any Senior Government Official or Chairman of the Town Development Council or the head of religious institutions. Two pictures of existing structures to be rehabilitated to be endorsed by the Director of Education/ Health and add expected completion time for the project after the cement has been donated. Applicants are to apply for one project at a time.