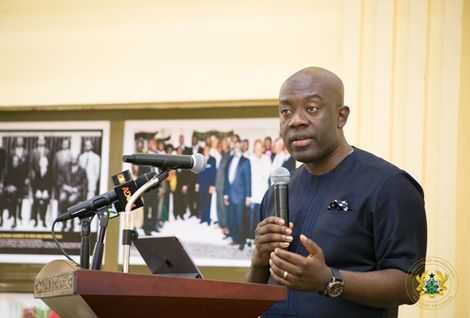 Government has heavily criticized former President Mahama for peddling falsehood to the diplomatic community when he engaged diplomats on the Ayawaso West Wuogon Elections.

Addressing a news conference in Koforidua in the Eastern Region, Information Minister Kojo Oppong Nkrumah described the actions of Mr. Mahama as unfortunate and called on the former President to apologise as his actions are prejudicial to the work of the Commission of Enquiry set up by President Akufo-Addo to look into the alleged cases of violence that characterized the elections.

”First, this is unfortunate act by a former President of the republic as it is prejudicial to the work of the committee. As one who has occupied the highest office of the land, it is unthinkable that he will make pronouncements that seek to prejudice or undermine the work of an fact finding committee at a meeting where he has invited diplomats so to do. We do not believe that in the various countries where diplomats come from, this prejudicial undermining conduct will be countenanced” he said.

In the said interaction, Mr. Mahama showed the diplomats two sets of videos;
One (a video from a legitimate media house) the content of which is the subject matter of an ongoing Presidential Commission of inquiry.

A second set (which includes 2 videos) which he claimed was evidence of members of an NPP vigilante group at the funeral of the former MP for Ayawaso West Wougon and earlier providing security for the NPP Parliamentary candidate in that by election.

Mr. Nkrumah said government will this week be serving notice to the members of the diplomatic community that two of the three videos and the narratives that the former President gave to them on the said videos are palpably false and designed at tarnishing Ghana’s hard worn reputation in the eyes of the international community.

“Indeed that video is a video of Policemen who had attended a funeral of a fellow police officer and had nothing to do with the late Agyarko’s funeral” he added.

Mr. Nkrumah said there was also no evidence that the Policemen who attended the funeral of their Colleague were even involved in either the police operation at Ayawaso West Wuogon or the SWAT operation at the residence of the NDC candidate.

“Mr. Mahama’s presentation to the diplomats of that video as evidence of a said NPP vigilante group involved in the Ayawaso West Wuogon incidents is false and should be treated as such. The family of Mr. Agyarko has even had cause to deny this and the government will bring this formally to the attention of the diplomats. Ghana is regaining its place in the community of nations and her government will allow no person for whatever parochial interest to undercut our collective gains” the Minister said.