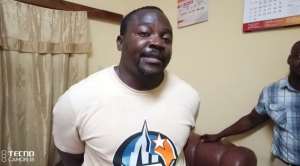 The Kasoa Police Command has arrested a 32-year-old resident of Kasoa in the Central Region for allegedly defrauding dozens of persons via popular e-commerce platforms, Tonaton and Jiji.

The suspect according to the Kasoa Police Command by his modus operandi advertises rooms for rent on the said platforms under the pretext of providing accommodation at a fee to persons who end up becoming his victims.

The Kasoa Central District Police Commander, Chief Superintendent Timothy Dasaa, speaking on the arrest of the suspect noted that Rafael Kle lives in a two-storey building bequeathed him and his siblings by his late father, one George Kle.

His late father was noted to be a notorious armed robber who was allegedly shot and killed in 2011 during a gun battle with the police.

After putting pictures of his father’s house up for rent, Rafael lures his victims who make payment to him after which he goes into hiding.

“He has been on our wanted list for so many months. He will send you to the house, negotiate and makes sure you make the payment. Soon after making the payment, it will be difficult for you to contact him again because he has fortified the whole house with wild dogs, and he has cameras all over. We have about 30 cases now [against him], so my advice is that whoever has been defrauded by this Raphael Kle should come and lodge an official complaint, so we take it from there,” the District Commander said.

The suspect on Friday, January 4, 2022, was put before the Ofaakor District Court.

The presiding magistrate, his lordship Ebenezer Osei Darko asked the suspect to be remanded into custody and reappear before the court on February 18, 2022.

Meanwhile, Chief Superintendent Timothy Dasaa has urged members of the Ghanaian public to be extremely cautious when transacting business via e-commerce platforms.