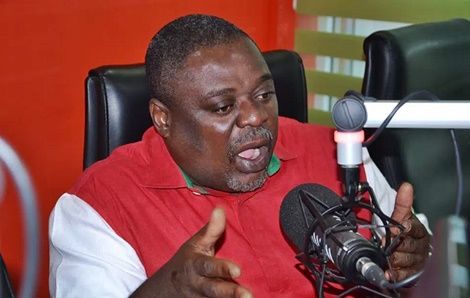 Deputy General Secretary of the National Democratic Congress (NDC), Koku Anyidoho, is expected to report at the headquarters of the Criminal Investi

Deputy General Secretary of the National Democratic Congress (NDC), Koku Anyidoho, is expected to report at the headquarters of the Criminal Investigations Department (CID) of the police service on Tuesday.

Mr Anyidoho was arrested last week Tuesday for alleged treasonable comments but he was released on Thursday on a police enquiry bail.

However, ahead of today’s visit to the CID headquarters, his lawyers tell Joy News they are committed to cooperating fully with investigators to ensure rule of law is upheld.

A member of Mr Anyidoho’s legal team, Victor Kojoga Adawudu, says the team is confident Anyidoho has not committed any crime.

“And if they are to do investigations, they may also call on us assist them. It is in their in their hands, they dictate the pace. We will patiently wait for them and allow the law to take its own course. We have pledged our full cooperation because we believe that we haven’t done anything criminal,” Mr Adawudu said.

Mr Anyidoho was charged with treason for suggesting that President Nana Akufo-Addo, like his father, will be overthrown in a civil revolt.

“On January 13, 1972, a certain Col. Ignatius Kutu Acheampong led a movement that removed the Progress Party from power. Busia was the Prime Minister and Akufo-Addo’s father was a ceremonial president. Somebody should tell Nana Akufo-Addo that history has a very interesting way of repeating itself. There’ll be a civil revolt,” Mr Anyidoho said.

The comments have been described as “treasonable.”