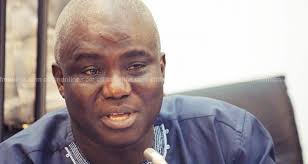 ERIC OPOKU’S SHADOWS ARE HAUNTING HIM!

This penchant to criminalize NPP youth in Sankore by Eric Opoku is nothing but a grand scheme to blacken the party and its members. From the narrat

This penchant to criminalize NPP youth in Sankore by Eric Opoku is nothing but a grand scheme to blacken the party and its members.

From the narrative he gave, what happened at Sankore was a clear case of armed robbery. In one breadth he says the thugs are NPP members, in another breadth, he says they tentacled their mayhem on some NPP members. Which NPP thugs would visit such mayhem on NPP fanatics and members?

Which party thug would attack people with the sole purpose of confiscating their television sets and other gadgets?

The guys were armed robbers and ought to be seen in that light instead of drawing partisan inferences into the whole incident.

There appeared to be a breakdown in the security details of the police in the area.

The New Patriotic Party is not to blame for this criminal act.

Eric Opoku is being haunted by his own shadows. He supervised series of criminal acts during Mahama’s government.

Let us take a trip back into time. There was a classic example of his barbaric and insidiously mordacious reign in the Brong Ahafo Region.

One of his thugs shot and badly maimed someone in an election related issue. The police went after him but he fled. He was later discovered in Accra, and in the house of Eric Opoku.

This man was hiding that wanted criminal under his bed. Since then, peace seems to have eluded that place. There were various reported cases of criminal activities spearheaded by Eric Opoku in the region.

Other criminal activities supervised by some NDC MPs and bigwigs in the region were ignored like a plague by the Eric Opoku led REGSEC.

Due to his own gory and unpalatably bloody reign coupled with the blood he shed, Eric Opoku sees every criminal incident as a revenge or vendetta against him. This is shameful!

Loading...
Newer Post
Koku to visit CID HQ on Tuesday as his lawyers ‘wait patiently’
Older Post
PRESS RELEASE: NPP IN ASUNAFO SOUTH CONDEMNS THE ATTACK ON THE MEMBER OF PARLIAMENT OF ASUNAFO SOUTH ON THE TICKET OF NDC, HON. ERIC OPOKU