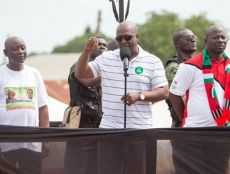 NPP Has “No Guidelines For Policies” And “Intolerant To Criticisms” – Mahama

Former President John Mahama has described the governing New Patriotic Party (NPP) as a government that is “intolerant to criticisms” and only implements “adhoc solutions” to challenges confronting the country.

Addressing supporters of the National Democratic Congress (NDC) at the Ramsey Park at Bolgatanga on Saturday after the ninth edition of the Unity Walk, the former President wondered why anytime the NPP government was criticised about its approach to addressing certain issues in the country they get so “worked up”.

Making references to the galamsey issue, Mr Mahama expressed regret that some personalities in the current government allegedly used all kinds of unprintable words on him [Mahama] when he tried to offer some suggestions as to how best the NPP could go about the galamsey issue without creating unnecessary hardship for the youth engaged in the business.

He reiterated that the NPP government should have been working hard at providing alternative means of livelihood for the affected people who were mainly the youth.

“The simple point I made was that we as the NDC have tried that approach of using soldiers to stop the illegal mining issue but it did not work and so we realized that the best way to stop them from illegal mining was to be working on providing them with alternatives” Mr Mahama pointed out.

According to him, if there is any President who has been heavily criticised then it is him [Mahama] but “as a good leader you must be calm and be focused in the face of criticisms.”

The former President also took a swipe at the NPP government for “using statutory funds” meant for the National Health Insurance Scheme and the Ghana Education Trust Fund (GETFUND) to finance some of its flagship programmes to the detriment of the NHIS and the GETFUND.

Mr Mahama explained that because of those bad decisions by the NPP, the NHIS is suffering as the current government is not able to pay claims under that intervention while funds for delivering projects under the GETFUND has also reduced and stalled GETFUND projects.

He further observed that the NPP government was still struggling to fulfill its promises like the ‘one million dollar-one constituency’, ‘one-village-one-dam’, ‘one-district-one-factory’ and other policies.

Mr Mahama noted that all the programmes the NPP has spelt out do not have policy guidelines which was a recipe for the unsustainability of the programmes.

“It is as if the NPP is running a government as you go because for every programme that they roll out there is no policy nor guidelines; at least take it easy and fulfill your promises sustainably,” he stressed.

The former President also stated that if the current government would not continue the various projects started under the Mahama regime, the NPP should at least for the sake of the people of the Upper East Region consider completing the Bolgatanga-Bawku road project.

He said he was highly elated about the fortitude, enthusiasm and resilience displayed by the supporters of the party in the region and expressed the hope that in 2020, such attitude would be translated into votes to bring the NDC back to power.

The walk attracted hundreds of supporters of the NDC. In attendance were former ministers of state, former and current parliamentarians, former DCEs.