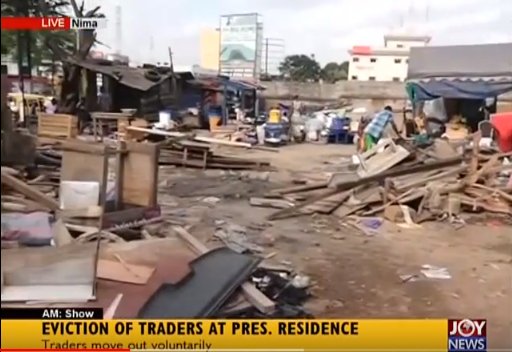 ‘We will come back to vote for you’; Akufo-Addo’s neighbors bid farewell

Traders and residents living around President Akufo-Addo’s Nima residence have started packing out of their structures after being asked to leave.

Thursday morning, Joy News’ Maxwell Agbagba visited the evictees to interact with them.

As at the time the team got there, most of them had destroyed their makeshift structures and had packed their belongings ready to leave.
Many were unwilling to speak to the media but a woman, about 60 years old who agreed to speak, was saddened by the eviction.
Wiping some tears, she told the Joy News team she had lived in the area for 34 years and lamented that the compensation paid them by the President will not be enough to start a new life.
She said after 21 years of selling drinks and food within what is now the President’s security zone, she will leave for her village. But she says her children will remain in Accra possibly in Nima.
“I will come and visit them frequently,” she said.

“We thank him. When it is time for elections, we will all come back to vote for him again,” she moaned.

A young lady who spoke to Maxwell off camera could not hold back her tears as she said she has nowhere else to go in the capital.

“I don’t have any relative in Accra, I have to go back to the village and start my life all over again,” she said.
Akufo-Addo after being sworn into office in 2017 towed his predecessors’ line of refusing to move into the Flagstaff house.

Prof. Gyampo told Joy FM’s flagship Super Morning Show Monday that Akufo-Addo should move into the Flagstaff house and allow the artisans to continue their lives.

“The President must move to live at the Flagstaff house…it is as simple as that,” he said. 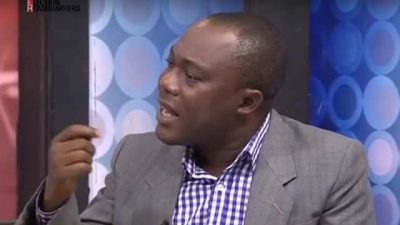 Prof. Ransford Gyampo
The senior lecturer at the Political Science Department of the University of Ghana believes the President’s decision to remain at his residence is just a display of mistrust among transitional governments.

“The state has spent a lot to provide security and accommodation for our Presidents …why then do we have to visit extra cost in providing security for our President who decides to live in his own private residence,” he fumed on AM Show on the Joy News Channel.