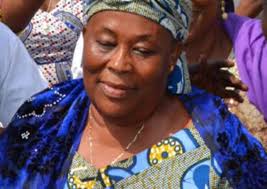 A staunch supporter of the New Patriotic Party (NPP), Hajia Fati, has justified slapping a journalist from The Multimedia Group at the party’s office,

A staunch supporter of the New Patriotic Party (NPP), Hajia Fati, has justified slapping a journalist from The Multimedia Group at the party’s office, Friday.

She admitted slapping Adom FM’s newscaster, Ohemaa Sakyiwaa Ahwenepa but said she only took that action because the reporter had not sought her permission before taking pictures of her, neither did she introduce herself as a journalist.

Speaking on Joy FM’s Super Morning Show on Monday, Hajia Fati said, “She was snapping [taking pictures of] me, I don’t know her, she didn’t approach me, she didn’t tell me anything.”

“I only saw a flash on my face twice, the third time, I slapped her because I didn’t know who she was,” she told host Daniel Dadzie.

Sakyiwaa was dispatched to the NPP headquarters on Friday to report on events as suspended Second Vice Chairman of the party, Sammy Crabbe had gone to the office to pick forms to contest the party’s chairmanship position at the upcoming National Delegates Congress.

But Hajia Fati created a scene after encountering Mr Crabbe who has been on suspension since 2015.

Screaming invectives at him, she cautioned the embattled vice chairman not to return to the party office although he had been asked to pay for the nomination form in cash.

“Where is Sammy Crabbe? Sammy Crabbe? We don’t want his money ooo,” she yelled as she walked about the party’s office in Asylum Down in Accra.

It was during this period that Sekyiwaa attempted to video-record the already furious Hajia Fati, and was assaulted.

“I got closer to her. I wanted to interview her so I took my phone out. I wanted to take a picture and so as soon as she turned, she looked at my face and asked me why I was taking pictures of her. I didn’t utter a word. She punched my mouth, and she almost took the phone from me,” she narrated.

However, in her defence, Hajia Fati said she had no idea Sekyiwaa was a reporter because no introduction of such nature was made.

According to her, she assumed Sakyiwaa was one of Sammy Crabbe’s supporters, the reason she slapped her.

“And that woman [Sekyiwaa] is not a journalist because she didn’t do the work of a journalist. She didn’t approach me, she didn’t tell me anything,” she added.

Hajia Fati who says she has many friends as journalists, insisted, there was no way she would have abused one if she was made aware of whom the reporter was.

Already, media practitioners have asked the government to take a decisive action against Hajia Fati who is reported to have physically assaulted others in the past.

The Association of Women in Media (ASWIM) has expressed regret over the attack.

According to the Association, it is unfortunate “such maltreatment of a journalist should occur in the 21st century and immediately after the celebration of World Press Freedom Day here in Ghana.”

Its Executive Secretary, Sulemana Braimah, who also spoke on the Super Morning Show described the incident as unfortunate.

“One would wish these things wouldn’t be happening in a country that has just recently been ranked as number one in Africa and a country’s whose democracy is doing quite well,” he noted.

Mr Braimah worried that the NPP headquarters is becoming an unsafe grounds for journalists in the country.

Citing incidents in the past, he called on the NPP to condemn Hajia Fati’s action and state their position on such incidents.He said, once the party has failed to address these past events, “one can just conclude that as far as the party leadership is concerned, the safety and security of journalists does not matter…”

He cautioned journalists who intend to report on activities from the party’s headquarters to go prepared because if anything happens to them, the party leadership will not protect them.

Mr Braimah also believes that until media organisations in the country come together to pursue an action against the abuse of journalists, nothing will change.

“Until we get to a point where if a journalist is attacked, we see it as an attack on our collective community as journalists, I think the perpetrators will continue to feel that you can attack a journalist and nothing will happen.”

He urged journalists who are abused, to report the cases to the police because it is only then that investigations can be carried out and offenders punished.