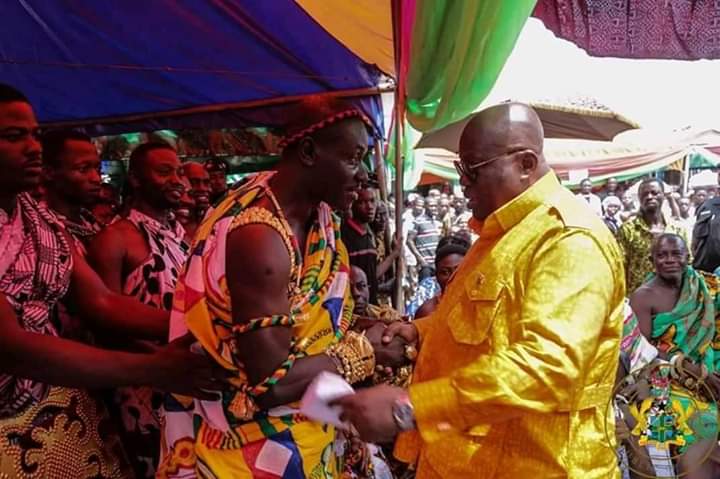 The people of ahafoman with one accord welcomed the President of Ghana, HE Nana Addo Dankwa Akuffo Addo to the new region. His tour of the new regi

NAGRAT, GNAT raise red flags about ongoing PPPs in education
I Won’t Lie, Akufo-Addo Asked Me To Step Down – Stephen Ntim
We will go to court if military deal is passed – Minority

The people of ahafoman with one accord welcomed the President of Ghana, HE Nana Addo Dankwa Akuffo Addo to the new region.

His tour of the new region started in Sankore in Asunafo South. The town of Sankore was brisk with activity and denizens from surrounding hamlets, villages and towns such as Nakete, Motopeneso, Nhw3ne, Abuom, Kwapong and others all thronged the streets to meet the President.

In his welcome address to the President and his entourage, the Omanhene of Sankore Ɔkogyedɔm Nana Appiah Kubi, thanked the President for being the first sitting President to visit Sankore. He pleaded with the current government to fix the deplorable roads linking Sankore to Kukuom and Abuom. He also donated a large track of land for the development of a technical school in the town of Abuom. The Paramount Chief also congratulated the current government for bringing relative to Sankore and advised the government to ensure the security and peace of Sankore is not neglected.

The Ahafo Regional Minister who also doubles as the Member of Parliament for Asunafo North, reiterated the resolve of the current government to keep to its promises to the people.

The implementation of Free SHS, NABCO and the creation of the new Ahafo Region attest to government’s resolve to deliver its promises to the people of Ghana, he emphasised.

The President, in a very happy mood started his speech by dancing to a gospel song (Asɛm papa bi a mati oye) to the admiration and cheers of his audience.

In his speech, the President congratulated the people of Asunafo South for voting peacefully to effect the creation of a new region. He emphasised the need to ensure peaceful co-existence and respect for the rule of law.

Touching on the new law to control vigilantism, he made it clear that, politicians who funded thugs to cause mayhem in the country will all be brought before the law.

On the deplorable state of roads, the President indicated that the previous government claimed to have fixed the very roads that the Omanhene of Sankore was requesting to be fixed. He showed that he was a President who travels on the roads and has seen numerous roads in deplorable states despite the claim by the previous Government of unprecedented road developments.

In Kukuom, the Oti Frimpong palace was busy with all and sundry trying to catch a glimpse of the President and his entourage.

The President of Kukuom Traditional Council, Osaahene Nana Kwaku Aterkyi II thanked the President for giving the people Ahafo Region, upgrading the Health Facility in Kukuom and pleaded for more infrastructure in the area.

The commaraderie that transpired between the President and the Omanhene of Kukuom was a spectacle to behold.

The President thanked the people of Kukuom for their continuous support of his government and promised to help improve the infrastructural development of Kukuom at large. 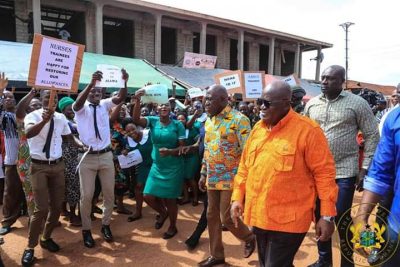 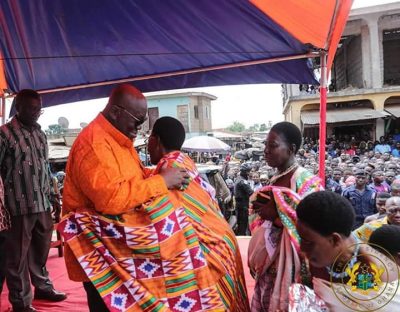 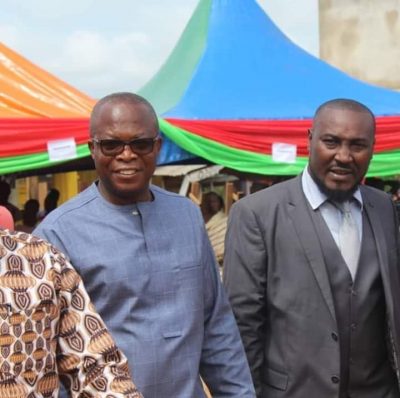 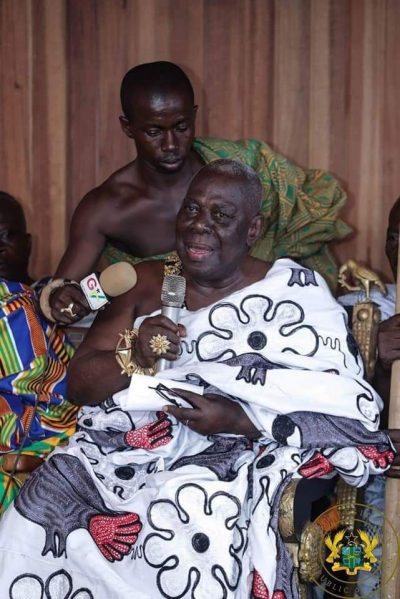 Loading...
Newer Post
One dead, 10 arrested in failed take-over of Kintampo water falls
Older Post
DIVORCE: The Richest Man In The World Got Off Lightly…Gives Wife $32billion Of His Amazon Shares