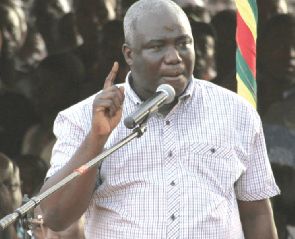 The bank accounts of Hon Eric Opoku, Asunafo South Member of Parliament and all the former ministers in the erstwhile John Dramani Mahama’s National

The bank accounts of Hon Eric Opoku, Asunafo South Member of Parliament and all the former ministers in the erstwhile John Dramani Mahama’s National Democratic Congress (NDC) government – who have been caught in the double salary scandal – have been unravelled.

DAILY GUIDE has sighted a list of all the affected ex-ministers which gives details of how the huge amounts of money were transferred into their respective accounts every month.

The alleged double-salary issue, which the police have said amounts to stealing, was widespread and appeared to cut across all categories of appointees who served under the former president.

The opposition National Democratic Congress (NDC) is trying to water down the issue by claiming that it was salary ‘top-up,’ but it is emerging that most of them were taking two different pay slips from different state institutions at the same time using different bank accounts.

The monthly pay slips were coming from the Parliamentary Service Board (PSB) and the Controller and Accountant General’s Department (CAGD).

So far, Emmanuel Armah-Kofi Buah, MP for Ellembelle and former Minister of Energy and Petroleum; Nii Laryea Afotey Agbo, MP for Kpone Katamanso, who was the former Greater Accra Regional Minister, as well as former Minister of State in-Charge of Social and Allied Institutions, Comfort Doyoe Cudjoe Ghansah, who is MP for Ada East, have been interrogated by the Criminal Investigations Department (CID) of the Ghana Police Service.

Also, a certain Bashir Fuseini Alhassan, MP for Sagnerigu and former Deputy Minister, Northern Region, was there to write a statement before being admitted to bail, as well as second deputy minority chief whip, Eric Opoku, who is MP for Asunafo South and former Brong-Ahafo Regional Minister.

Three others, including Edwin Nii Lante Vanderpuye, former Minister of Youth and Sports, who doubles as MP for Odododiodioo; Alhassan Azong, ex-Minister of State in-charge of Public Sector Reforms, who was the former People’s National Convention MP for Builsa South Constituency and Dr Dominic Akuritinga Ayine, who served as Deputy Attorney General under President John Mahama, were also at the CID headquarters for interrogation.

The employee number of Haruna Iddrisu was 712534 and the net salary was about GH¢8,099.37. Iddrisu, former minister and current minority leader, who is yet to appear before the CID, was getting his monthly salary into his account at a bank at the ministries, Accra.

For Alhassan Azong, his employee number was 712536 and was taking a monthly net salary of about GH¢8,160.07 lodged into his account at Bolgatanga, the Upper East Regional capital.

The employee number of Abdul-Rashid Hassan Pelpuo was 714107 and the net salary was about GH¢8,160.07, lodged at a bank at Kwame Nkrumah Circle while Emmanuel Armah Kofi-Buah (14197) was collecting about GH¢8,386.87 monthly through a distressed bank on the Spintex Road.

Edwin Nii Lantey Vanderpuye (725100) was receiving a monthly pay of about GH¢7,594.49 into his bank account at Ring Road Central, Accra, while Mark Owen Woyongo, who reportedly detected the anomaly at a point and alerted the authorities, had the employee number 71521 and was taking about GH¢8,861.25 monthly through his bank at Adabraka, Accra.