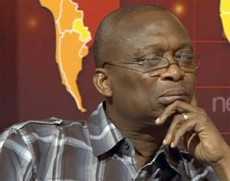 President Addo Dankwa Akufo-Addo was right to describe the opposition NDC as hypocrites according to the managing Editor of the New Crusadig Guide newspaper, Kweku Baako.

President Akufo-Addo during a national address on the Ghana-US military agreement condemned what he said was the “unspeakable hypocrisy of the fraternity of some front-line politicians, who make a habit of running with the hares and hunting with the hounds, who secretly wallow in the largesse of the United States of America, whilst, at the same time, promote anti-American sentiments to a populist constituency.”

According to him, “it is difficult to understand that such people, knowing what they do know, would set about so blatantly to confuse people, and go as far as calling for the overthrow of our democracy? A democracy that has become the beacon of good governance in Africa? A democracy that has survived for a quarter of a century and encompassed even the most irresponsible episodes of ill governance, in a state of unity and stability? A democracy that has provided the framework for systematic developments in our social and economic welfare, and assured us of the longest, uninterrupted period of stable constitutional governance in our history?

Surely, this is the kind of cynical manipulation by reckless self-seekers, which, in the fullness of time, the people of Ghana will acknowledge and condemn. And I am sure that as the facts become clear and widely available, and as the people come to terms with the evidence, they will reject the falsehood and deliberate attempts to destabilize our peaceful country. Truth is sacrosanct”.

However, Kweku Baako feels the President was spot on with his choice of words.

Contributing to a panel discussion on Joy FM’s newsfile programme, he said: “When you have a fraternity of front line politicians out there, telling you that this 2018 agreement will create room for the introduction of nuclear bombs, homosexuality into this country; if you have these people who are experienced; who have been in government; who have signed similar agreement out there pushing that line and telling the world that there are secret tunnels from the US embassy to Kotoka International airport and that that is how they will bring them in here and that there is a military base by all means…and these are frontline politicians…these are people who are expected to know because they have been part of it and they are out there playing on the keyboard of people’s emotions…who are they; Hypocrites of the highest order. You read the statement they (NDC) issued; you would think they descended from Mars…so the President was damn right to have described them as such…”