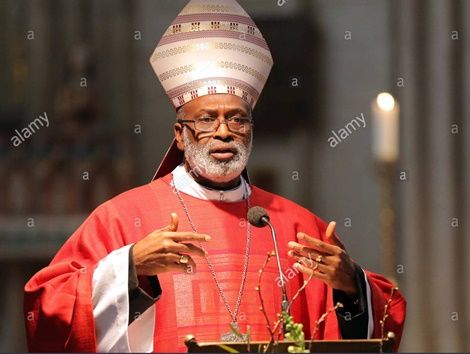 Catholic Metropolitan Archbishop of Accra, the Most Reverend Charles Palmer-Buckle, has taken a swipe at the two leading political parties in the co

Catholic Metropolitan Archbishop of Accra, the Most Reverend Charles Palmer-Buckle, has taken a swipe at the two leading political parties in the country for putting their parties’ interest ahead of the nation.

They (NPP/NDC) should overcome the animosity to inspire “humble service” among the civil and public servants, church and traditional leaders and the private sector.

Speaking to the media shortly after a church service on Sunday April 1, 2018, he expressed discomfort with the bitterness that had characterized the relationship between the two major political parties – the New Patriotic Party and the National Democratic Congress.

“And yet we allow the acrimonious relationship between the two political parties to dictate our sense of humility, service, selfless service, sacrificing love and service.”

He rallied Christians to demonstrate Christ-like qualities of humility, humble and selfless service to drive the nation’s development.

If they reflected these noble values as taught by Jesus Christ in their daily lives, Ghana’s success would become a model for the other developing countries.

He said he was pained that people were not ready to make sacrifices for the good of the society.

That he said should change and rallied everybody to make sure that in all endeavours – economically, politically, socially, culturally, the nation’s interest was placed above any other consideration.

They should follow in the footsteps of Jesus Christ to make the society a better place, he added.

The Most Rev Palmer-Buckle also counselled forgiveness as they celebrated the Easter – to make it to the newness of life.